My rant with Arkansas pitching

I know many want to worry about this aspect of our game. I know the national pundits constantly bring it up too.

Here is my opinion and it is worth very little if anything to anyone other than myself, but I’ll put it out here anyways:

We have played the toughest schedule I can ever remember an Arkansas team playing (thats not football). Hell even several of our scheduled cupcakes are gonna be in the tourney. I can’t even begin to think of how many times we have been playing top 5, or 10, or 15 teams. Most on the road as well. Its unreal.

with the pitching staff we have. Let me say that again. We did all this with the current staff.

Now let me ask… as we move forward is the competition suddenly going to get harder than say playing a #3, or a #5, or a #2 on the road? Or any of the other 4-15, because we have played most of them and won WITH THIS PITCHING STAFF.

I like our chances with this staff. Not worried a bit as long as Jobu shows up by the 5th or 6 inning each game.

Would it be nice to have 2-3 aces sure, but I’ll not discount what this staff has done with this brutal schedule. They are all heart and all Razorback!!!

Eventually teams are proven to be WHAT THEY ARE. You play enough games, you know what you have.

agree completely. We’ve played some awfully good teams that can hit. We know good pitchers can often make good hitters look bad, but I am sure the reverse is true, too. Pitching to good hitters leaves less room for error. And sometimes you run up against a really tough (or inconsistent) ump. The one we faced Saturday was one of those.

Plus he’s in people’s heads now. When Blaine or Zay left the game, the opponent could feel like, okay, he’s out, maybe we can beat the bullpen. And sometimes they did. When Kopps comes in, it’s like the voice of doom: “You’re toast, dude.”

It would be nice to have a lockdown Friday night starter AND have Kopps at the end, but the way we’re doing it now is working very well.

Kopps enters games in cherry picked situations. These are clear chance to win a game opportunities, whereas the starters face 9 innings of uncertainty.

Cherry picked? Did you watch the Tennessee series? We were trailing when he came in on both Friday and Sunday. If he doesn’t slam the door we don’t have a chance to come back and win, Coming in (a) when we’re behind and (b) knowing he’s probably going to have to finish both games with 3+ innings is hardly an ideal situation,

However, I expect that from you; you will search for the tiny cloud in the clear blue sky and then bitch about the weather,

Not many starters going 9 innings these days. Kopps saved our bacon (sorry) at Tenn. We might very well have been swept without him. Have you even watched us play?

And DVH has mentioned how our hitters seem to come to life when he comes in.

Now that’s a really good pitcher, one who actually contributes to SCORING runs!

I would have to disagree about Kopps coming in the game in Cherry picked situations,he does sometimes,but I know 2-3 times he has come in and we’ve been behind because DVH knows he can hold them and figures out offense will eventually get going and they have a we won the games.

Obviously, my use of “cherry-picked” is misconstrued. I was attempting to differentiate the starters’ role with 8 full innings to go once they take the mound versus the closers role with normally a max of three innings, and maybe only one round through a lineup. I feel the starters role faces much more uncertainty and more chances for ups and downs as the closer. Never does Kopps enter the game in the second inning with the Hogs down 5 runs - which would waste the closers ability to close out.

Actually, I think he had some long stints a couple of years ago where he came in fairly early and kept us in the game until late.

Actually Kopps rarely gets to come in only needing 3 outs with others taking care of 8 innings. From what I’ve watched this season he is more likely to come in and pitch 2-3 innings of close out ball and around 40-50 pitches per visit to the mound.

4 innings was his longest outing of 2019. He worked more than 2 innings only 4 times that year (once against Ole Miss in SR and once against TT in CWS).

2019 was his most productive year, prior to this year. He made 30 appearances and was 6-3. But, even then, he really wasn’t spectacular. He was reliable, and occasionally very good. But he wasn’t the go-to guy. Actually, on occasion he was pretty bad that year.

2020 was, of course, a weird year, but, again, he wasn’t spectacular then either. Actually, I thought, unless he really picked up his game, 2020 was going to be a step back from 2019 (had the season continued).

Now, he is spectacular. Be it the mental maturity that goes with a 6th year college player, the improved ability to locate multiple pitches, or the experience of pitching to hitters at this level… all of those factors have likely contributed to his ascension. But, no doubt, it has been the development of his cutter that has been a career changing pitch for Mr. Kopps.

As we prepare to take our annual father-son trip to Hoover next week, my now 13 year-old reminds me of his opportunity to meet Kopps at the last tournament.
“Dad, now he’s famous”. 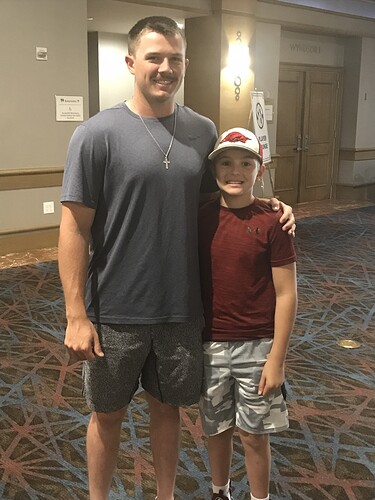 I feel ya Votan, but it didn’t take long for this to turn into a Kopps thread. Kopps is one of the best pitchers around here in a very long time, yes.
But we haven’t won 40 games just because of KK. We really have a lot of arms that bring different stuff to the table if only for an inning or two. Albeit a few times that was stuff was gravy for opponents. Kind of a mixed bag.
First time time in a long time we don’t have that one dominant starter that overshadows the rest of the staff. But the experience is there.

I think pitching the final three innings is the toughest of tasks. daBoar, not sure I’m all in there.

Cherry picked would be pitching to Grambling State or one of the lesser midweek games. His numbers were compiled against one of toughest schedules Hogs have faced.

One thing I wish there had been a few more midweek games to test the rest of staff. Probably have a few more wins, too.

I was not trying to be critical of Kopps; rather I was saying that I felt Knight’s and Isiaih’s accomplishments their last year were more important — if the Hogs win the series this season I might change my mind.

Disagreement gets you slammed on here. I love KK but I also love a Friday night dead cinch ACE. It’s college so things are always changing but OP is we are pretty dang good with what we have. Hard to argue that point.