In talking with Robert Mann at the Stadium Shop on Razorback Road, there have been a few calls for the cap I wore on Saturday for the first pitch. That is not a hat that has been for sale to this point. He will get to work to produce them. He’s talking to his cap source.

When it’s ready, he’ll tell me. I want a few of them. That cap was given to daughter Becca in Jackson Hole, Wyoming at a birthday party for a Bentonville friend.

She presented it to me when she returned last July. I guess it had been hanging in my closet waiting for a great time to be worn. Now, everyone in the family wants one. Robert will get that done and I’ll alert everyone here when he has them. 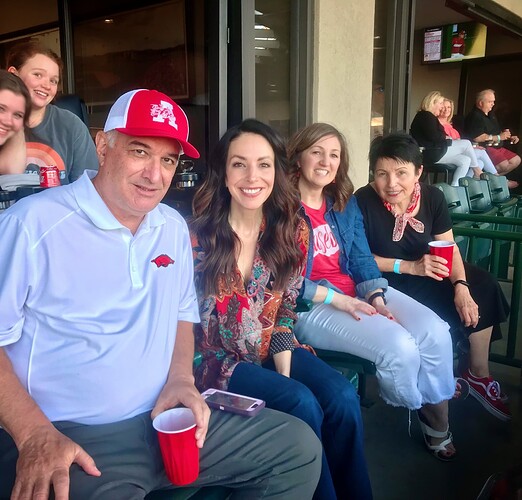 Thanks, Clay. I definitely want one. Btw, Robert Mann is a good dude…been a friend for years.

LOVE that Hat, gotta get one as well… Beautiful Picture and Family too.

Great pic of the family!!!

Clay is a blessed husband and father.

So my wife helped me realize a few weeks ago that your daughter Sarah is a friend from church. I never realized she was your daughter although my wife says we had that conversation with her one time. Now I see her in your picture there. Nice hat!

We are proud of Sarah!

Just realized that your new place of business is across the street from the Jacob Wolf house. I’ve been there but it was 30 years ago. Dang, we’re getting older than dirt.

Get Clay an NIL deal ASAP!

I’m in for one of these hats too!

Is there much original memorabilia out there for the Arkansas Cardinals? I would think such memorabilia would be very rare.

Not to my knowledge.

The last year for the Arkansas Cardinals was 1908, so any memorabilia would be 114 years old. And the enrollment of UA at the time, from what I can tell, was a couple of hundred, so not many sources for that memorabilia.