Eric Musselman underwent surgery this morning on his injured shoulder. He will not coach Saturday at LSU or during the game against South Carolina next week. Keith Smart will be the interim head coach. 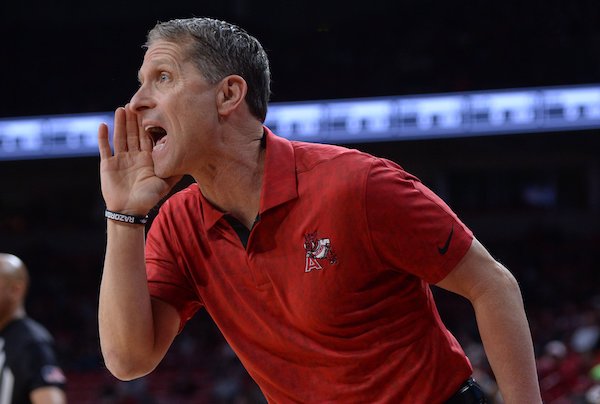 Arkansas Coach Eric Musselman had successful shoulder surgery Thursday and he is expected to miss at least the Razorbacks’ next two games.

I think it must have been really bothering him since he had it during the season. Shoulder injuries are painful and recovery after surgery isn’t fun either. I would imagine he’s not been that fun to be around. The constant pain impacts your sleep and everything you do practically. And the skid the team has been on didn’t help. I’m glad they played well last night.

Muss has a few tough months in front of him doing PT! Nobody needs to be in that pain. My wife is still having a rough time and her surgery was September 25 and she is doing all of the exercises at home too. Missing 2 games shouldn’t be a big deal. The win last night should ease some give him some hope for this season.

The constant pain impacts your sleep and everything you do practically

Not on subject, but I understand this.

There was a point in the game last night where he was getting on to a player (I think it was Devo) and he threw both hands up in the air. He immediately dropped the left arm, grabbed the shoulder with the right arm, bent over and looked like he was about to pass out. He almost collapsed back into the chair and sat there for a bit.

I knew he had really tweaked that bad shoulder then. Knew it was unlikely he could last til end of year.

Shoulder injuries are painful and recovery after surgery isn’t fun either.

Is there anyone in the portal we’d like for a few weeks?

He’s scouting LSU as we speak.

He injured his shoulder at the beginning of December and that’s about when we started on our skid. I’m sure it’s just a coincidence but you never know. It may have affected certain routines in practice and his physical manner of demonstrating certain points he wanted to get across. Plus the lack of sleep affects your cognitive functions. Just sayin…

Oh I have. Third degree separation of the shoulder 3 years ago and a nasty spiral fracture of the left tibia 2 years ago. Both still cause problems today. But I’m grateful it wasn’t worse, in either situation.