Musselman is in Fayetteville

The jet landed at Drake Field this evening a little after 7 o’clock. I went to get a little bit of video, but it didn’t turn out great. Our photographer, J.T. Wampler, did get some good shots of him getting off the plane, though, including the one below.

The party had two cars waiting on them inside the hangar. I waited by the fence where the cars exited. Yurachek was driving and Musselman rolled down his window, and said, “What’s up Matt?” I asked he was, he said great and they drove away toward campus.

Driving toward the interstate I could see the video boards were lit up at the football stadium. I’ve been told they say something to the extent of, “Welcome, Coach,” but I haven’t seen that for myself.

There were about 15 fans out at the airport to get a glimpse of the new coach, plus about seven media members. That is fewer media and more fans than showed up when Chad Morris landed 17 months ago. Of course, that day was bitterly cold and he landed in the middle of a workday. 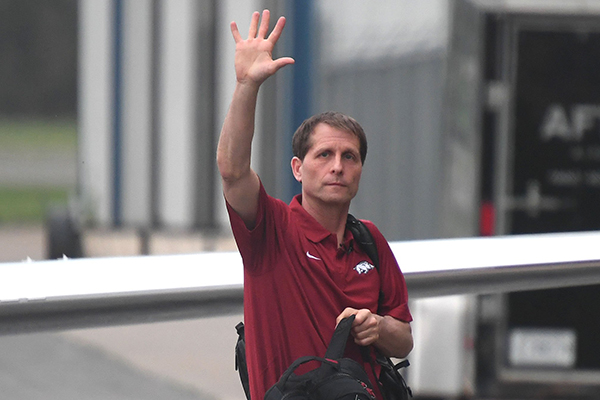 Does he know you Matt?

Does he know you Matt?

No, he does not, but Yurachek does. I’m sure Yurachek told him to roll down the window and say hi to Matt.