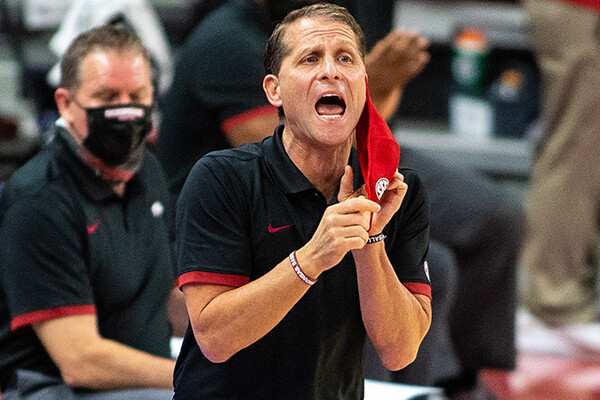 Arkansas played uncharacteristically in a number of ways Saturday in its 81-68 home loss to No. 12 Missouri.

Funny. If my 12 year-old heard me say it once, he heard it a dozen times, as the Hogs began a possession in the Missouri game:

Muss misses Mason and Jimmy, who bailed our offense out last year making shots with high degree of difficulty. They need to find two players like that on this team. I see potential for that, but none of them have done it before. It will be interesting how it develops. Every Top 25 team has a clutch scorer or two.

Is 23 layups ill advised shots? You miss 20 of them and act like the opponent plays fantastic defense. Also had plenty of good looks at the 3 ball. IT WAS JUST A PISS POOR NIGHT OF SHOOTING.

No, not every layup attempt was ill-advised. Layups in which players attempt with 2-3 defenders in their airspace, Musselman wants to get rid of those, have guys kick the ball out and work to get a higher-percentage look. But you’re right, Arkansas had plenty of quality shots that just didn’t fall.

It’s a learning experience, we have not been pushed or behind in any game. Alpha dogs wanted to take over and makeup ground, way too much individual play and little team effort. PJ hit it on the mark, frustration and desperation.