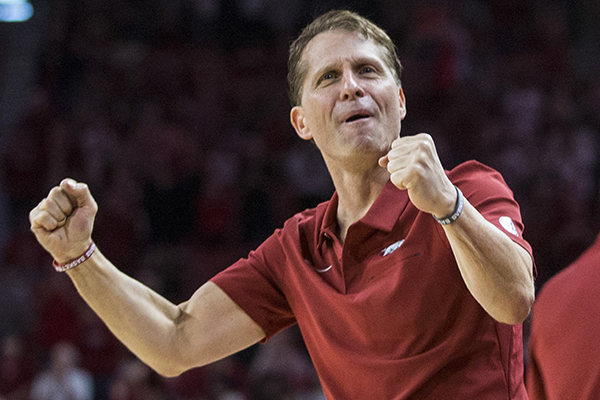 Musselman has sights on in-state talent

Great that we have a HC that’s going to make in-state D1 talent a top priority if that player fits the needs of the program. We will probably never get them all, but if we can keep the majority of them no one will play harder with the UA uniform on than a homegrown player.
His enthusiasm is exactly what our program needs at this time.

Wait a minute! Has any of our HCs in either football or basketball not made in-state D1 talent a priority? Especially with the qualifier (if player fits the program) that you yourself added.

I don’t get why you are singling out Muss in this.

Sorry if you took that post as a dig at any other coaches, wasn’t meant that way.
Just meant that it’s great that the current coach recognizes and recruits hard our D1 in-state talent.

Thanks for the clarification. Yes, it is very positive that Muss is targeting instate talent and also high school talent. I remember some posters were worried that he will focus on transfers only. That is definitely positive. I get your point.

And, I like that he will still rely on transfers, just not as heavily as at Nevada. Transfers can be a great tool to keep from having that down year when you lose a large group of players in one year to graduation and/or or the NBA and transfer portal. I’m glad that he sees he can recruit 4 and 5-star high school players to Arkansas when he could not at Nevada.

And I hope Muss can get us to the top echelon of the SEC, while also hoping Mike can do the same with St Johns in the Big East!

when he could not at Nevada.

Jordan Brown was a 5 star.

Jordan Brown was a 5 star.

Quite a contrast in his ability to attract 4 star high school players here vs Nevada. In addition to the #8 recruiting class, he also pulled in 2 top 10 ranked transfers and one transfer in the top 15.

Quite a contrast in his ability to attract 4 star high school players here vs Nevada.

So why didn’t you just say this to begin with? It’s absolutely true, and a reflection of the differences between the two universities/conferences … not of the coach, which your initial statement seemed to imply (and was factually untrue).

So why didn’t you just say this to begin with? It’s absolutely true, and a reflection of the differences between the two universities/conferences … not of the coach, which your initial statement seemed to imply (and was factually untrue).

That was the exact implication I was trying to express. It was poorly worded. I should have said “he, and any other coach”, could not at Nevada (the implication was meant to differentiate between the 2 schools).

Mike is gone. A new team is in charge.

In addition to the #8 recruiting class, he also pulled in 2 top 10 ranked transfers and one transfer in the top 15.

I wonder what transfer rankings actually mean. The transfer pool is really about guys that didn’t think they can get to NBA and players that either were not stars on the team they are transferring from or players from mid-majors wanting to play at P5 schools.

Not saying Vance, Tate and Smith are not good but I don’t see them at the same level talent wise as Moody, KK and Williams.

either were not stars on the team they are transferring from

First, I would argue that Smith was definitely a “star” on a power 5 team, headed to the NCAA tournament. If he weren’t considered a “star” by the head coach, I feel certain he would not have been awarded the most minutes of playing time. Vance and Tate meet your descriptions, but I believe will play a big part in how good this team can be.

There is a molding needed between “talent level” of incoming freshmen and perhaps “the lower ceiling” of juniors and seniors who have proven they can contribute at this D-1 level of play. The best teams have a mixture of both. KY’s only national championship in the Calipari era had senior leadership that none of his other teams have had. He’s had other “more talented” teams that have failed to win a championship.

What I meant by “star” is a go-to-guy. I get your point though. But I still can’t tell how good he is by watching the three Arkansas games. But as you said he did get a lot of minutes at IU.