I have seen people say that Muss and his family love NW Arkansas. I know every coach claims such things no matter where they are located. It is standard coach speak. It is obvious Sam Pittman loves it, both from his words and actions.

Just what he says. That’s all we can go off of until he does something to prove it. (Like go fishing with Clay every weekend of the off season

Good question. Nothing of real substance to add, but when you see how his wife has embraced the NWA culture and become involved in the community, it suggests she enjoys it here. (Of course, that behavior may just be a byproduct of her personality in general… and she would be the way she is wherever they lived). Even so, his family certainly seems very happy in NWA.

One would think that while his daughter still in school, staying put might have a stronger appeal, as long as he feels he can win at a high level and has the infrastructure to support this. With Fayetteville appearing to be a pretty family friendly environment, the facilities supporting basketball and more, and the feeling that one has things going in the program, it seems that with the salary recognition that just transpired, the University has done what it can control to make it attractive for Coach to stay a while.

Most, including me, would say NW Arkansas is a perfect place to live and raise a family. But career considerations may one day overshadow that reality and lure ambitious young men away. I loved living and working in Miami in the late '90s and wasn’t looking to leave; then an opportunity came along to move up, jobwise, in L.A. and now I’ve been here most of the last 20 years and love it.

embraced the NWA culture and become involved in the community, it suggests she enjoys it here

She did the same at Nevada.

I think the family is adaptable and very relocatable. I think he is going to do whatever it takes to chase his dream of coaching basketball at the biggest place and at the highest level. That is what high energy is all about. I don’t think going fishing every weekend is going to be something that will get in the way of reaching the objective. At least now.

As he gets into 60s, that will change. Until then, every top job opening will be a threat,

She did the same at Nevada.

I’m not convinced that he wants to coach at the absolutely top level. Rather, I think he wants to win a championship. If the school he’s at has the resources and support to do that, I think he’s good. Key: how is his relationship with management. If Hunter were to leave at any point, I’d become very nervous. It’s apparent Muss puts a lot of emphasis on that. He does a lot of things that not any AD would prefer.

As for location, it’s also apparent that he has a love for Southern California, especially San Diego. He doesn’t golf or do outdoors things that you get in NWA. He does love the beach though.

My gut is that basketball outweighs all of that other stuff greatly right now. As long as he’s getting what he wants out of the program and Danyelle and Mariah are happy, he’ll stick for awhile in my opinion.

(I was not ounce worried about Arizona. I would be if UCLA or USC opened up)

This is spot on. UCLA and USC are the jobs to worry about in the future. Not worried about the others unless he gets some ridiculous offer (50% more than what we offer) from Kentucky in the future.

He does love the beach though.

We need to make sure he’s aware of Sandy Beach on Greers Ferry Lake in Heber Springs.

Muss may also look at the history of both Coach Sutton & Coach Richardson & their comments about coaching UofA & living in NWA. Sutton was clear about his mistake of a lifetime in leaving Arkansas.

NWA is rated a most desirable place to live. So many now living in Los Angeles cringe at the expense, taxes, & crowded West Coast lifestyle. There is a reason for the mass exodus out of California & not as concerned about USC & UCLA.

There are other strong & growing SEC basketball programs with deep pockets, so expect that Muss will remain challenged at Arkansas by playing against some of the best.

Arkansas is not an elite program yet, but has strong BB history & rabid fan base on which to build. Muss has a great opportunity to build his own legacy at UofA & upgrade us to an elite program.

was not ounce worried about Arizona. I would be if UCLA or USC opened up)

Arizona did not worry me either. Besides UCLA and USC, I do worry about Kentucky, Duke and UNC. Those three are college basketball royalties that attract recruits like a magnet. It will be hard for a coach to turn those three down, unless there is something else going on in those places like an investigation.

The other thing to think about is that his wife has roots in the south as well, born in GA. IIRC her father is actually from Arkansas.

Not much of reason to leave XNA. There are two direct flights daily to LAX on American. 3.5 hours in air and only about 12 hours in traffic to Venice, Malibu, Huntington or Newport.

I think razorag’s view of the situation is correct. The general public probably tends to underestimate the importance of the relationship with the athletic director. I am hopeful that Hunter will be here for a long time too.

And as for location, I though it was really funny when Minnesota fans thought that they could get Musselman because they thought he considered Minnesota home, when it’s obvious to anyone who watches his interviews that he considers San Diego home.

I’ve seen off-season Instagram and Twitter pics of Muss and family out on the lake. I believe that has been Beaver Lake but not certain.

Muss stated he has 2 bosses Hunter & Danyell. The latter told me all I need to know about who loves NWA.

ights daily to LAX on American. 3.5 hours in air and only about 12 hours in traffic to Venice, Malibu, Huntington or Newport.

This! I’ve never been a multi-multi-millionaire but if I were I would easily skip those crowded sunny beaches in California, Bama, and Florida and fly to (and maybe buy) some island with isolated sunny beaches. Therefore, NWA, with its beauty, fine dining, and attractive culture would hold its allure for my whole family.

Couldn’t agree more. That’s what planes and money are good for. We love the area from St. Augustine, FL. to Savannah, GA. So many beautiful islands with fabulous food- real, fresh seafood. Can’t wait for this virus crap to end.

People I talk to tell me Muss’ talk about the Arkansas job and liking NWA isn’t just lip service.

Agree, the relationship with an AD is huge for coaches. It’s huge for any of us to have trust in our boss and know he or she understands where we’re coming from.

NWA needs one of these: 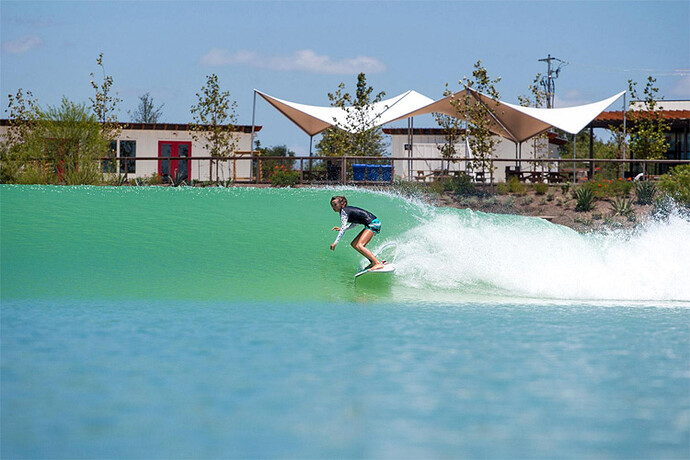 In the near future, you will be able to surf anywhere. Wave pools and artificial waves will allow landlocked surfers to ride perfect, ocean-like barrels 24 hours a day, 365 days a year. Explore the most famous man-made and static wave concepts and...