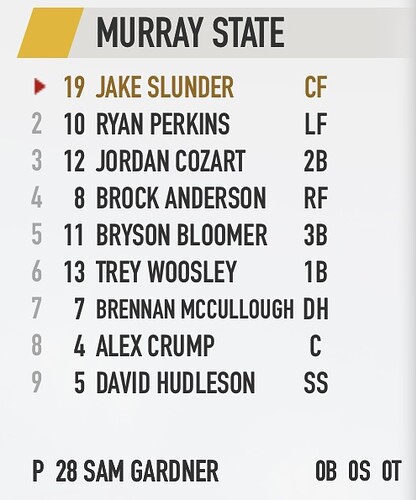 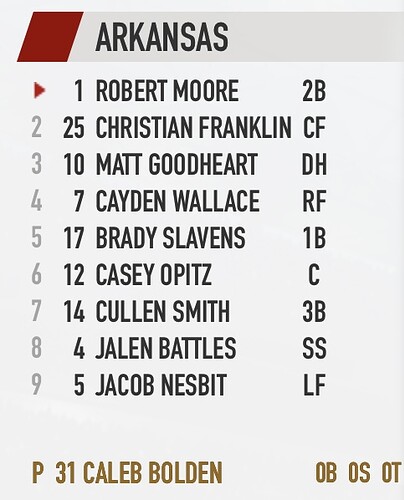 How to watch the game today?

Behind yet again! Better get this rotation figured out,you don’t fall down 2,3 runs early in the SEC and win many… Just too many arms… Bolder ain’t the answer.

This ones gonna be tough to come back in

Still lots of at bats for us, but Murray batters look locked in

Yeah I agree and their starter has + stuff,bats need to get it going

Nothing like going into your second at-bat down 4 runs. I think we can score 5, but I hate to think we have to shut them out the rest of the way for 5 to win it. Looks like we’re gonna need 8-9 runs. But so far, this one is on Bolden.

Boom that a boy Cullen!

Well, good way to get back into the ball game very quickly. That 3-run HR from Smith turns this right back into a game.

Moore is just outstanding at the plate. Going to be making a lot of money one day.

Franklin should be standing on first with a walk. That second strike was so outside it would have had to turn 90 degrees to touch the corner of the plate.

Yep best approach on the team, goes with the pitch

Cmon Adams, need you to shut the door for a few inn,good much needed DP

That second strike was so outside it would have had to turn 90 degrees to touch the corner of the plate.

True, but the ump just called that; you can’t just watch the next one thrown over there…for the K.