so I log on for some hog news, and see this headline. what a sad way to start a day. If any of you ever met Mr Luplow, he was as kind and loving a man as you could ever meet. Huge hog fan, when we first met and he realized how much I love the hogs, he came back a couple days later with a 1959 “little pigs” baseball cap for me. I’ll wear that this week.

And that’s how he was-we had met once, and he just took me into his “family”. Loved his wife so so so much, and he has really missed her since she passed, so at least they are together again.

He was the kind of man that you could meet, and walk away thinking “I want to be more like that man”. reminded me of my grandfather, and that’s as big a compliment as I can give a human.

Yet another one of my dad’s teammates on the '59 team. He hadn’t seen the news, when I informed him, his comment was “I’m sorry to hear that. Billy was a really nice guy.” Unfortunately I never got to meet many of his teammates besides Harold Horton and Barry Switzer, and the chances are dwindling.

Sorry for your loss Holden.
RIP Mr Luplow. Another Hog in Heaven. 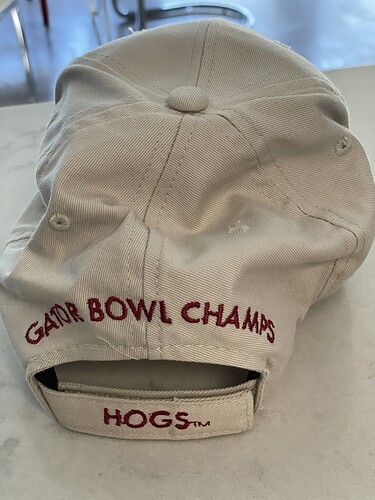 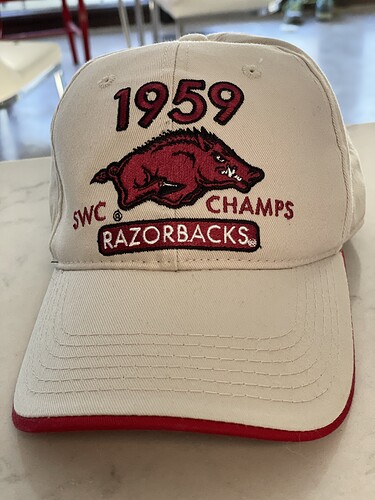 Nice hat. I don’t think my dad got one like that but it would be just like him to have it and never wear it. I’ll find out if he got one.

I have no idea where he got it. I also didn’t know your dad was on that team, very cool!

Yeah. Dad didn’t make the travel squad for the Ole Miss game in Memphis that year and used that Saturday to get married instead. Also skipped the Gator Bowl trip when they told him he wasn’t going to get to play, and his football career was over. I was born the next October.

You won’t find Dad on the lettermen’s list because he never played enough to letter (limited substitution era). He played in one varsity game, against Baylor in Waco. But he was invited to the '59 team’s 50th reunion in Fayetteville. He wasn’t involved in the program at all for years, but Harold Horton kinda reeled him in, got him into the A Club, etc.

Dad got that hat too, presumably at the reunion in 2009.

good stuff, thanks for sharing

did not realize who was being talked about until i saw the obituaries in today’s paper…grew up at St Paul where the Luplows were members…never knew that he was a Razorback great as it was never advertised by him at church.i was a few years older than both their kids and always remember them as a"Hollywood couple"(for lack of a better term)he had the solid black hair and was a man’s man and Mrs Luplow was a beautiful woman who carried herself with grace.they were always involved with the youth and even years later he would speak if he saw you out and about…when my dad died…they sent a really nice sympathy card and attended both the visitation and service…truly the place has lost a good man.