A new Big on the market. Muss to contact? 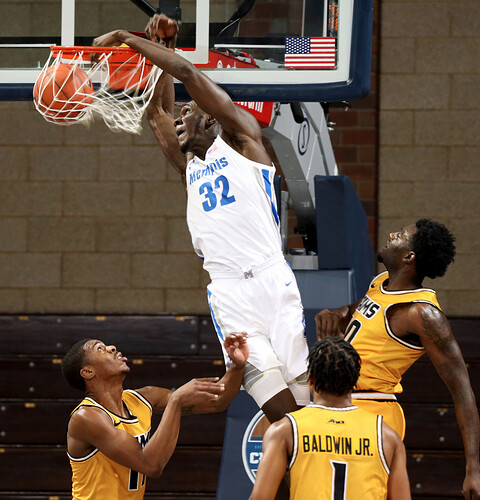 University of Memphis men’s basketball center Moussa Cisse has entered the transfer portal according to a report. ESPN reporter Jeff Borzello tweeted Monday evening that Cisse had entered the portal.

Horrific at the foul line.

Lots and lots of potential there.

I wouldn’t say no too quickly.

I’ll trust you on that, DD. I haven’t seen him play, but the numbers aren’t very impressive.

Just to give a little background on him.

Memphis talked him into skipping his senior season, reclassifying and coming in early.

Meaning he should have been a center at Lausanne Collegiate School in Memphis this year.

All that being said, I don’t know if Arkansas or Moussa Cissee are interested in each other.

I just know there is more than stats about him and he is viewed as a future NBA talent.

Lot of growth and potential there. I am sure our astute coach will be watching every bit of film he can find of Cisse
playing live basketball. No telling what his size will be by November.

He is from Memphis, I doubt we pay enough for him to come here. I think they got a pretty good pay scale down there.

The few Memphis games I saw last year, the potential wa evident. He is still raw, as you described. I have a feeling he is going to Vanderbilt.

I have heard LSU is involved with him heavily.

“And for you sir?” I think I’ll have the chocolate moussa cisse.

Comparable stats and abilities of Moses Kingsley at the same age? I would love to have someone like that, especially if he will hang around for a couple of years as he develops.

I will go with terra mousse cisse. My favorite.

It also says that he is ftom Guinea. If he comes here he would be a Guinea pig.

It seems some are trying too hard! Keep it up, I love corny…

If he came to AR he would be a Guinea Hog then.