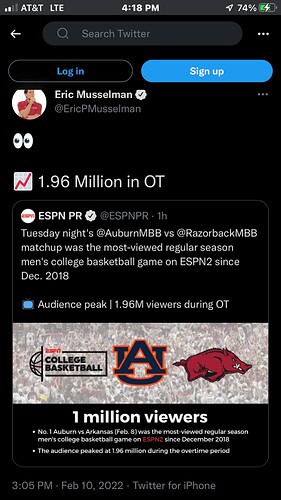 Not surprised, but it excited me at the same time.

I watched the game live all the way through but the stupid recording shut off at 2 hours, usually it gives me the option to extend but for some reason it didn’t and I didn’t think to tape the next program after it so I only caught regulation on my tape.

This adds a little more context to those numbers. 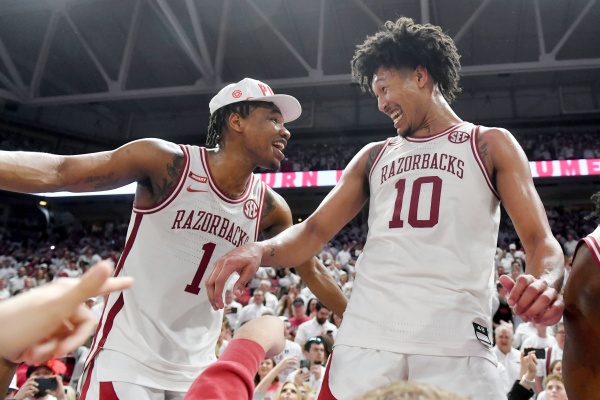 ESPN2 registered its largest audience for a regular-season college basketball game in more than three years Tuesday night when Arkansas defeated No. 1 Auburn.

I didn’t extend mine either, but for some reason I had 3 mins to spare. Got lucky I guess.

I have my YTTV set to record all Arkansas events. It will automatically take care of time run-overs

I don’t ever watch reruns, especially when I saw the whole thing live the first time, but I might make an exception for this one. I noticed Auburn was available for replay on ESPN+ tonight while I was looking for the women’s game (which was unusually difficult to watch; on my TV I got “user not authenticated” but I was finally able to watch on my laptop).

Its one for the record for sure. I’ve got several games saved in football, basketball, and baseball. Even the 94 championship. It’s nice to go back and watch on a rainy day specially when the dead period hits.

I always keep them to watch in the off-season when there’s nothing on I want to watch. I will erase them when next season starts

My dvr has an option when you set to record I can go back and edit the recoding to start a couple of minutes early and continue from 30’minutes to 3 hours late. It stinks not have that complete game to watch again.

One of the things I enjoy about YouTube TV’s DVR is that it records all the Razorback football and basketball games automatically since I’ve chosen that preference in the library. It doesn’t matter how long the game goes, it records all of it. (That was a frustration for me in the past with a regular DVR – games going long and getting cut off at the end.) And since it’s unlimited recording, I don’t have to worry about running out of space.

I may can do that on mine,I know it records the shows I tell it too auotmatically,haven’t really checked to see if I can program it to do Arkansas sports.