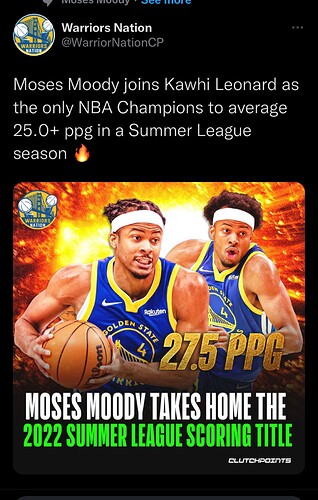 Last night Jay Will had 8 boards 8 assists and 0 for everything shooting. This is basically what we expected. Displaying his potential for rebounding and assists while holding his own on defense, meanwhile flatly disappointing on the offensive end. So Jeremy, I have to admit he could’ve improved his offensive game another year in college. Could’ve as in possibly. Like he could improve as a professional too. The key is getting work as a go to scoring option or anything besides a last resort scoring option. I don’t think that was going to be his role as a hog next year. Most any other college team, probably. But I think Jaylin has the tools to emerge as a big time scorer if he was handed a role similar to Bobby Portis sophomore year as a hog. I think it will be interesting to see what opportunities he gets with the Thunder before he becomes a free agent again. Honestly the best parts of his game reminds me a little of tim Duncan, now only if Jwill would get to work on his mid range bank shot and quit shooting threes.

He’s not really looking for his shot right now. The rest of his game looks good. I was happily surprised he got $8.2 mil. I just hope most of it is guaranteed.

From what I hear, OKC is very happy with him and he may have a spot in their regular rotation this season. If that happens, that would be faster than what Moses, Isaiah have done, I feel they are looking for exactly the same role from JWill as at Arkansas.

I feel they are looking fir exactly the same role from JWill as at Arkansas.

Yes, I believe NBA teams are seeing how valuable a player like Draymond Green is to Golden State. JWill needs to work on his scoring, but he is further advanced than most all rookies in all other phases of the game. He has a good understanding of what Draymond brings to the Warriors, without much scoring.

JWill has advanced court vision. He has really good big man passing skills. He understands help defense. He’s a terrific “position” rebounder. He understands offensive flow. Many of those things, that other rookies have to learn for a couple of years.

I believe he will have a long career in the NBA and will ultimately be a valued player on a winning team.

He’s not really looking for his shot right now.

And scoring is overrated in the league.