Looked like dead man walking. Trey Biddy asked some very pointed questions as did the woman from rivals. Almost crossed the line.

I like the guy but at some point he has to have some results. Both coordinators should be on the hot seat if morris isn’t. Worst defensive performance I’ve seen in a while and we have been pitiful both years under chavis. Today was the worst. Arkansas football might be at an all time low right now. A laughingstock. I’m a proud hog fan but I will admit, I’m embarrassed.

Agree completely. He through the players and especially KJ under the bus. Hinting at his ability to grasp the offense. Looks like he grasped what he was asked to run just fine to me. CCM is now answering questions to protect himself before his players. Biggest mistake of his tenure. The only thing he has going for himself is the talent he recruited into the program. Now he’s trying to alienate them whether he realizes it or not,

How do you expect him to look?

I’m a fan through and through, but I’ve never gotten to the point where I’m embarrassed to call myself a fan.

I watched the whole press conference and don’t see at all where he through Jefferson under the bus. He did say he gave him plays he felt comfortable with him running, which has been said on this board about Jefferson many times. I don’t see the rest of what you said from his post game interview.

Based on the discussions earlier this season about % of offense installed, it sounds to me like KJ was running the install for this game, just like the other QBs. We just didn’t see a lot of it. Granted, some QBs may be more comfortable with some plays than others, but I can’t imagine having one set of offensive plays for one QB and another set for another. If so, then I don’t know how you can practice and expect all the players, not just the QBs, to understand fully what is expected of them. I also didn’t hear that CCM threw his players under the bus. He is frustrated, yes. He knows he is on the edge of his seat as well as having players on the edge of their’s. At that point, you start grasping for answers and hoping the press conference ends quickly.

He also flat out lied to try make his decisions look justified. When he said he saw a lot of dropped passes to defend Hicks he threw the wide receivers under the bus. There was one drop,

And to call out KJ by saying they kept things simple for him, by saying he had no regrets, and by not naming him the starter for next week - well, it wasn’t a good look at all.

None of that was a lie.

There were dropped passes that should have been caught. Were they on target? Most weren’t, but you can see Burks made an amazing catch by Jefferson that was under thrown. You got to adjust sometimes and our WR’s did drop some balls that were catchable.

One pass thrown by Hicks that should have been caught was dropped. The rest were either overthrown, under thrown or woefully late (resulting in the pass being behind the receiver or allowing the defense to deflect).

I do not think the athletic ability of some of these players is as bad some want to say. They aren’t a team full of 5 stars but there’s some talent there. What ISN’T there is the ability to coach them to play to their potential. Time for CCM to pack his bags and head back to Dallas. He should just flat out resign…but he won’t.

Not true. I saw a couple of slant passes that should have been caught that weren’t.

One to Mike Woods that was 3 steps late? Where’s the other one?

All is well… move along everyone. 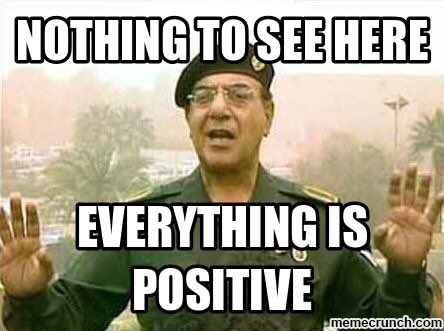 Morris dropped two slants back to back on the third drive. I remember that vividly.

Never said everything was fine.

While KJ looked good in his first drive, that is not enough to name him the starter for next week.

I’m embarrassed about the way we play. will always be a hog fan but if you are not embarrassed about what you see on the field, about how the commentators on the sec network make fun of us and just shake their head, then maybe you don’t have much pride in our program.

it is time right now to turn the corner. if that means keeping morris then so be it. if morris keeps his staff intact, that will tell me all i need to know. our defense is just pathetic. bottom of the league in many categories. offense isn’t much better. we have had a qb carousel. how many qb have played the last two years? seems like the starter no matter who it is struggles. the second guy comes in, has some success but we still lose, next week a new starter, same thing.

i look around the country, and freshmen play everywhere, even at qb. isn’t it obvious we need a running threat at qb? yet the only two guys we have that can run only play in mop up situations. the name of the game is to win and look at our record. instead of playing by the book, we don’t pull out all the stops to try and win a game.

i think most of us are patient. but rout after rout doesn’t show progress. I’m not embarrassed to be a fan, im embarrassed for our program, our fans, our alumni, our donors, etc.

it has got to stop, period.

I’m not advocating to keep or fire Morris, but I will say it’s a much harder decision than most want to recognize.

And I agree with the true DT QB. That’s the one area about Morris’ offense I’ve been clamoring for and questioning on why Jefferson hasn’t played until yesterday, whether he was ready or not.

You can’t have an 8 years like this. You just can’t. HY has a very tough job ahead of him. You know, his son plays for Chad. That’s going to make it extra tough. I do think he is dissatisfied with Chad. Were that not so, HY would come out recently and say “stay the course, we really lack talent, and this thing is going to take more time to rebuild.” But he hasn’t done that. So I think the die is cast. It’s Chad’s own fault. He’s basically just not a good football coach. And his staff is worse. He’s made some of the worst imaginable coaching decisions this year. And it looks like we made one of the worst imaginable decisions hiring him.

im am certainly embarrassed by our coaching and coaching decisions. we are the laughingstock not only in the sec but the country.

did you watch the sec commentators at half time? chizik, the other two. they question what is obvious to everyone that has watched us play under this coach. a quarterback carousel not gonna cut it.

i am a proud arkansan, and this staff is not doing me proud, period. we don’t need 4 game plans, one for each quarterback.

lets just hope we win the toss against wku and at least get the ball before we are down 7 zip.

I went back and read what I posted and realized I didn’t use a word like allude. It was not direct. It was not direct criticism . What CCM should’ve done was brag & prop KJ up , which he did not do. Instead after this many games and reps alluded to giving KJ a package he could handle. Like he’s not grasping the offense. I will have to go back and watch it to specifically answer your reply. Maybe I’m reading into it due to emotions about the current situation, but it struck a cord with me.