I’ve been working on this story all week and happy to publish it today. It’s a look at Sutton’s years at Arkansas and how he turned Barnhill Arena into a great home-court advantage. 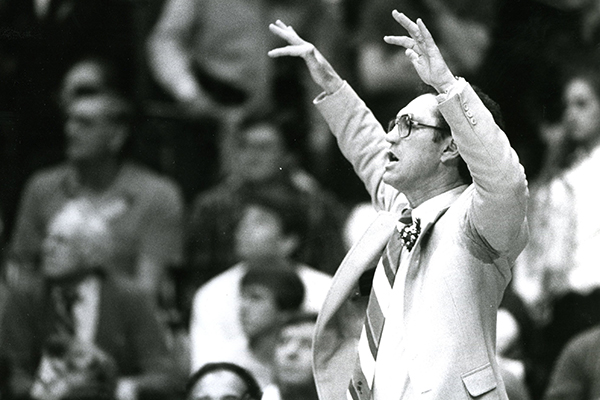 When Eddie Sutton took the job as head coach at Arkansas, the Razorbacks’ Barnhill Arena was far from a home-court advantage.

Seth, Scottie and I researched the home records of some of college basketball’s most consistent teams from the mid-1970s to mid-1980s. None of the teams we researched had a better home win percentage than the Razorbacks during the Sutton era. 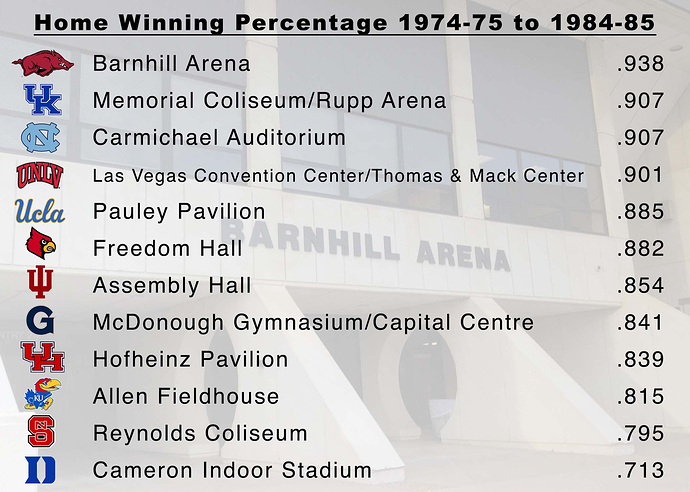 Outstanding article!! I wished the hog wild band and the band director would be that wild like they were in Barnhill

Awesome article! Obviously a LOT of time and effort into your latest masterpiece. A BIG MAHALO!

Great article, Matt and all. Even the credits were awesome.

Outstanding article!! I wished the hog wild band and the band director would be that wild like they were in Barnhill

Lobby the AD to return Walton to the same non-commercial game-day format as was used at Barnhill - ie Hog Wild Band & crowd noise without commercials & no disc-jockey.

Wish we could entice Robbken to return to UofA under his style of crowd frenzy. No doubt that would help attendance & home field advantage.

Matt, some of your best work…well done.

I was a Hogwild bandmember 1979-83. Some of the best times of my life. We felt like we were part of the game. We got treated like rock stars at the SWC tournament by our fans. Matt’s story brought back wonderful memories.

Goes to show what an innovative master Coach Sutton was.

We need to return to the old Barnhill format at Walton (& perhaps Razorback Stadium) where the band, Hog fans, & student body made home games an exciting event again & a must have experience for Arkansas fans.

For those who enjoy watching commercials, tv at home works well. Have found that the current format of commercials & DJs at home games only waters down the excitement & crowd frenzy.

Muss may prove to be a great coach & no doubt he would not mind the added support & advantage of a loud home field. Also helps our recruiting in all sports.

You’re never going to get rid of commercials at sporting events. Like Jim Robken told me, the chance to create something like Arkansas had at Barnhill can never be done again.

That’s too bad. Assume money dictates that & that Walton sellout games would not offset revenues from commercials.

Without hesitation I would drive up from DFW & enjoy a couple of games at Walton each season where the band & crowd again dictate the game day atmosphere.

You seem to be assuming that getting rid of sponsorships at the games would automatically lead to sellouts. It wouldn’t. Most people either don’t notice or it doesn’t bother them enough to matter. The reasons people stay home go way beyond what happens during the timeouts.

You seem to be assuming that getting rid of sponsorships at the games would automatically lead to sellouts.

Perhaps, but there was good reason that Barnhill & Razorback were consistent sellouts & with long waiting lists for tickets in a time when UofA had less than half the current enrollment & a much more rural NWA. It was exciting to attend in those days & would welcome that again.

Assume that televised games, game commercials, & years of mediocre teams have taken their toll on attendance. My son who just graduated from UofA acknowledged students stopped attending games due to low & declining expectations.