The kid gave us a real lift in the first half tonight. Disappointed he didn’t get any run in the second half.

At this long he has passed Cyllia. So he had made somewhat of a move up the depth chart.
He grabbed the rebound and didn’t mess around and dunked it home!
The blocks were just as impressive. He can provide help off the bench he just needs to gain some more PT!

Cylla and Chaney keep playing like they are and Ethan will get more run.

When he learns to play position defense he will get more playing time.

On defense, I focused on him ('cause I’m still trying to figure out why he isn’t getting minutes) and to me his main issue is constantly leaving his feet in an attempt to block every shot. Also, when fronting, he doesn’t have the weight or strength to hold off an offensive player so he gets really low (which makes him shorter than his actual height). His help defense was pretty good and he was okay in space.
As I stated in a previous thread concerning Henderson, I still don’t get why he isn’t playing more. Especially considering Cylla has been a big disappointment.
The issue going forward is two of our “bigs”, Cheney and Henderson, are foul prone. It’s going to be interesting to see how we defend Bassey.

Maybe he’s improving. Perhaps he hasn’t always practiced the way he played last night. I suspect if he practiced that way, he’d have played more. I think this coach is going to reward good practice. He’s going head to head with the players that are getting his minutes. That’s usually the answer, out play those guys in practice and you will get time. It’s generally pretty clear in practice when it’s a head to head matchup.

Here’s a look at Ethan’s on-court numbers last night, per HoopLens. Defensive PPP is high in a short period, but I like the returns on 2-point field goal percentage. His three blocks were a big key to that. 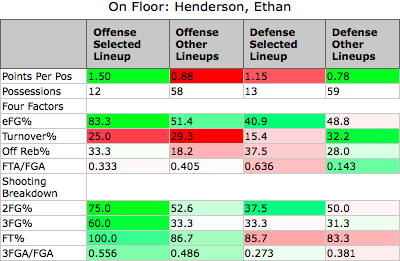 Ethan was on court for only 7 1/2 minutes, but it was a very nice contribution, sans the 3 fouls (I felt 2 of those were ticky tack calls). If he can get his fouls down to say 1 per 7 1/2 minutes he might see some real playing time…and really be able to help this team.

Ha has to learn the marginal fouls will get called against him at this point. Part of the curve. Just keep working, I think Miss sees the potential but he has to earn his playing time.

The main thing holding Ethan back is true size. He and Chaney are the same height, but Reggie seems to be a mammoth compared to Ethan. He wouldn’t have to try so hard to post up against the opposing bigs, which causes him to overplay and commit fouls. I was really hoping he’d gain a bunch of weight in the offseason.

Ethan is not nearly as quick laterally as any of our other bigs. As well as he played the other night, he was exposed a couple of times when he had to guard guys out on the perimeter.

Ethan is not nearly as quick laterally as any of our other bigs. As well as he played the other night, he was exposed a couple of times when he had to guard guys out on the perimeter.

I don’t remember seeing him “exposed” at all on the perimeter. I made it a point to watch him on defense and I just didn’t see that. I remember one defensive possession in particular where he guarded well in space and then switched well (it was a half a tick late but his man gained no advantage). Furthermore, the only way he’s going to get used to switching and guarding on the perimeter ((considering he was inside player in high school) is to get thrown in the fire in game situations. I’m not criticizing the coach but with the way this team turns the ball over seemingly without repercussion (benching), to not play Henderson because he isn’t a perfect defender is befuddling to me. I felt the same way last year.

I did notice that at one point when he ended up defending their guard. The guard went around him but fortunately missed the hoop.

But doesn’t Ethan look quicker on feet than Chaney?

I did notice that at one point when he ended up defending their guard. The guard went around him but fortunately missed the hoop.

But doesn’t Ethan look quicker on feet than Chaney?

To me, Henderson brings just as much to the table defensively as Chaney in terms of energy and blocks. Both are fouls waiting to happen. I think because Chaney has played way more minutes (and is much stronger) he has a better understanding of the game tho.
I’m not saying it’s an either or type situation with those two. I’m just saying it seems other players get leeway in terms of making mistakes and Henderson gets punished. You don’t sit the type of energy he brought in the 1st half of the last game for the entire second half. So what if he fouls out? You didn’t play him anymore anyways. And I won’t get started on Cylla!

Ethan was one of my high school players to watch as a 9th grader. So, I have a soft spot for him. However he just didn’t improve as expected as he got older. Parkview people tell me it was his work ethic. Both Anderson and Musselman have limited his minutes, so I don’t know if that is what is holding him back.

Anderson finally did give him minutes in the NIT when Gafford’s minutes became available.and against Providence he had a similar showing as against AP. Having seen that performance against Providence and knowing we were short handed this season and having Chaney out, it was a big surprise Musselman put Henderson to the end of the bench out of sight.

I think a slight difference between Chaney and Henderson is that Chaney has shown he can connect from midrange. However in defense of Henderson, he has not had the opportunity to show that. I have seen videos of his workouts in summer where he was working on his jumper,

To be honest, I won’t be surprised if his name shows up in the transfer portal any day.

30 years ago Ethan would have been a guy you would redshirt and bring along slowly until he was ready to play his Junior year. Also it was an era where bigs were valued more.

I see him staying buried on the bench with the addition of Jaylin Williams next year. I too see him entering the portal.