Today’s scrimmage begins at 2:30 at Baum-Walker Stadium. The starting pitchers will be Blake Adams and Caleb Bolden. I also think Hunter Milligan will throw today at some point.

I’m looking forward to watching Bolden and Milligan pitch. Both are coming off Tommy John surgery. Milligan saw live hitters in the fall, but I think this will be the first time that Bolden has since he was cleared from rehab.

Bolden had some good game action before he went down. I hope he’s back. I hope both of these young men stay healthy. It took Campbell a little time to get his command back but he made it so there a good chance

Scrimmage open to the public?

Yes, all of the outside scrimmages are open to anyone who wants to attend.

So far the standouts have been Heston Kjerstad (2 HRs), Robert Moore (HR and a triple) and Will McEntire, who threw four solid innings. I’ll have a recap a little later.

There was some question in the dugout that Kjerstad’s first HR was fair. Kjerstad and the ump were emphatic that it was fair. I guess it went over the fair pole.

Here is a photo gallery from today’s practice.

If the ump calls it fair, then it’s fair. I used to mention to Pat Jones (when he was defensive coordinator at OSU) that his pass rushers were being held. He said, “Did the referee throw that (expetive deleted) yellow thing?” Well, no, he didn’t. Then it was not holding.

BTW, the player in the black jersey with no number on the back is Robert Moore.

Here are my notes from today. I’ll probably add some more thoughts to this thread a little later. 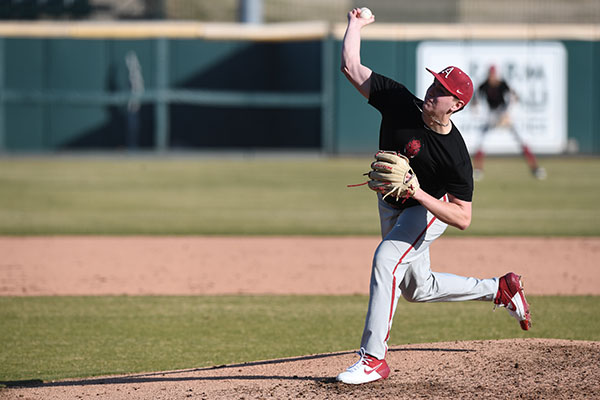 Observations from Arkansas' third baseball practice of the preseason

Perhaps the hardest pitcher for Arkansas’ hitters on the first weekend of preseason practice was a soft-toss right hander.

I noticed today that the big Baum Stadium sign atop the video board has been removed. It is being changed to reflect the new stadium name.

Hunter Milligan didn’t throw this weekend. He has a strain in his arm and because of the injuries he has overcome, including the Tommy John surgery, the coaches and training staff are being cautious with him.

Milligan and Zebulon Vermillion were the only pitchers who didn’t throw during the three scrimmages. Vermillion has a hamstring injury that isn’t expected to keep him sidelined long.

Neither Cullen Smith nor Trey Harris batted in the three scrimmages. Smith, a transfer from ETSU, is ineligible this season. That Harris hasn’t batted leads to me think he might be redshirting, too.

These were the pitching stats today, according to my scoring.

These are the offensive stats today, based on my scoring:

I thought it was interesting that Pleimann (who will be ineligible this year because of transfer rules) got in over 2 innings of work.

You play three straight games at the start of practice, there is no way to let starters stretch out their number of pitches. They need live pitching for the hitters. By next weekend, the starters will add an inning each. That might bump Plieman to just throwing on the side at that point. But you needed a lot of pitchers to make it through three straight games that first weekend. You are playing what amounts to six games in three days – when you split the squad. Add to that the cautious atmosphere of the first time out, you need extra arms. It’s good for the team, good for Plieman.

Not to mention that Milligan and Vermillion were held out.

Thank you for the report! I am really pumped up for this season to get started. I will be going to Houston to watch us sweep that tournament! WPS

That Harris hasn’t batted leads to me think he might be redshirting, too.

Is that normal? Injury? Other?