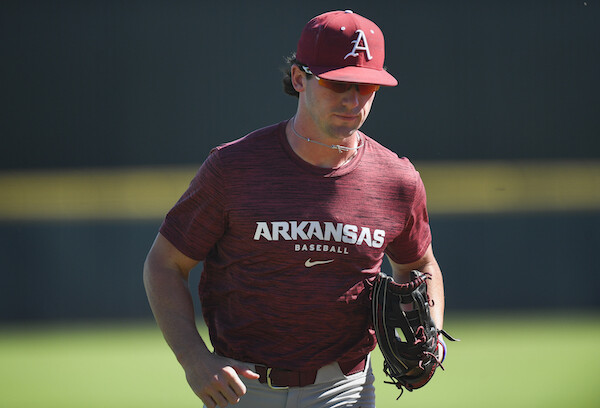 Wallace off to good preseason start

Some more thoughts from today:

• Brady Slavens seems to be struggling some as a right fielder. He committed an error today on a routine fly and had at least one, maybe two balls fall in foul ground that I’ve seen right fielders catch.

• I think Michael Turner is the No. 1 choice at catcher, but Dylan Leach is going to be able to play some. His defense and bat are not as polished as Turner, but Leach is a lot better than this time last year. He is making the throws to second base a lot more consistently than he did last year. He has to become more consistent. He had an error today and I think a passed ball, too.

• I am really impressed with this group of freshman position players. It is a group that I think will be the core of the team in 2023 and 2024. From what I’ve seen, it looks like it could be a really good collection of hitters and potentially fielders, too.

• I liked the little bit we saw of Brady Tygart today. He is behind some because he was injured in the spring. I’ll be interested to see what kind of role he has by April.

• Will McEntire looks a lot different physically than I remember when he pitched in 2020. He has lost some weight and looks stronger in his upper body. He had some tough luck today with errors. Leach threw a ball away after Varnado struck out and ran to first base. Slavens’ error also came in the full inning with McEntire on the mound. He was good for the first four hitters he faced, then seemed to be less effective as his pitch count increased.

• There was an interesting teaching moment in the second inning. Kendall Diggs was at third base and a ball got past Leach, but Diggs didn’t come home. Dave Van Horn yelled from the dugout, “You’re leaning the wrong way!” His shoulder was leaning toward third base, not home plate. Nate Thompson, the third base coach, took time to explain it. He scored on a wild pitch a couple of pitches later.

Do you think Michael Turner has a chance to get on the field any or possibly DH in some games where he doesn’t catch? Presuming that Turner will be our starting catcher, I’m wondering if they might play Leach at catcher a little more than normal as a backup. I know we’re so deep with position players and players who might DH, though, so that may be hard to do.

Since he wasn’t wearing a number, I finally figured out that he was the one playing third base in the later innings today.

Turner can play the corners. He played both positions at Kent State.

Matt do we move Slavens back to first base if he can’t play RF that is a crucial position. Could stovall play in the outfield?? Soliz had a great day.Lanzilli seems to be struggling… Diggs looks to be a very good hitter… very good to see varnado get a couple of hits today

Plenty of options on this team for offense

The good thing about most of the players is that they can play multiple positions. The DH position can get a bat in the lineup, too.

I think it’s premature to write off Slavens in right field. He worked out there in the fall and played in the outfield before he came to Arkansas. My observations are based on this weekend of scrimmages. Everyone has struggles from time to time.

Yes seems like I had remembered him playing RF before and I think he’s a good enough athlete. The throwing might be a little bit of a problem for him but it would probably be our best situation to get all our hitters on the field

Something tells me Dave Van Horn will want a right fielder who can cover foul ground. I remember a play that I bet he remembers. Stay tuned. I bet Slavens figures out that Bermuda Triangle area or returns to first base or DH. I can’t imagine a lineup without that bat.

There was an interesting teaching moment in the second inning. Kendall Diggs was at third base and a ball got past Leach, but Diggs didn’t come home. Dave Van Horn yelled from the dugout, “You’re leaning the wrong way!” His shoulder was leaning toward third base, not home plate. Nate Thompson, the third base coach, took time to explain it. He scored on a wild pitch a couple of pitches later.

I saw Thompson speaking to DVH after that. He explained what he had told Diggs about a ball in the dirt. I’m sure that Diggs learned from that. The team was really good last year in taking advantage of balls in the dirt.

Conversely, with Opitz behind the plate, he was clean on stuff in dirt. He was especially good with Kopps. Kopps could bury it in the dirt and know Opitz would handle it.

That’s very true Clay. I think it’s going to be extremely hard to find a defensive catcher as good as Opitz… Turner I hear is very good and can really swing the stick. We may lose just a tad on defense but may benefit quite a bit more from Turner’s bat.

I’m interested to watch how defense at catcher and center field play out. I know Moore and Battles have the middle of the infield locked down. But catcher and center field have always been great at Arkansas for almost forever. That needs to continue. Dave Van Horn says Turner can block and throw so that’s a big positive. Blocking is just huge at catcher. Do not ever take what Opitz, Wise, McCann and Walker have done. They were all defensive studs.

I totally agree Clay. I think Webb in center field may be very good listening to how DVH talks about him. I’m glad to hear Turner is very good at blocking because like you say that can save your team a lot of runs and allow your pitches to feel comfortable throwing nasty breaking balls in the dirt… there are a lot of possible Dots that can connect on this team …I am really looking forward to seeing them in action.