Several of the more prominent bracketologists got together on Twitter Spaces this weekend to create a bracket (Lunardi dropped by but wasn’t one of the crew). They picked the 68 teams and assigned sites. 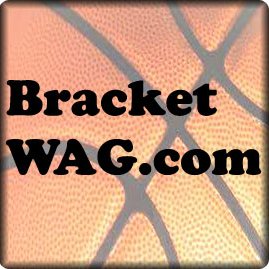 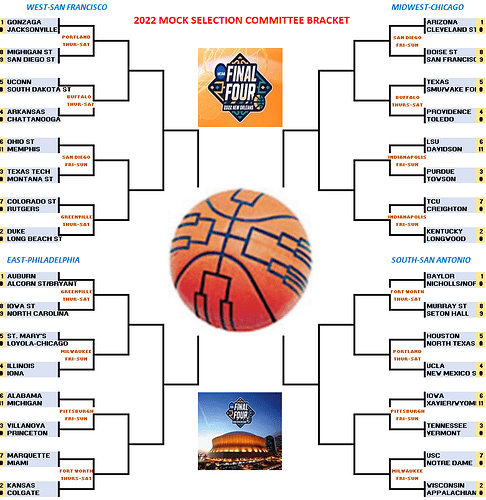 We were given a 4 seed in the West and placed in a pod in Buffalo against 13 seed Chattanooga. Likely second round opponent? UConn. Likely Sweet 16 opponent? Gonzaga. Army’s blood pressure just went up 20 points. Duke and Texas Tech are the 2 and 3 in that region.

Hope not to be in west regional, game times would be late at night for us.

We are not going to be in the West!

It’s the Midwest or South…

Except for the venues

Collision course with Gonzaga. Why not, let’s do this.

This bracket is quite similar to Lunardi’s bracket this morning. Gonzaga is the 1, we’re the 4 in Buffalo, UConn is the 5, and Tech is the 3. But he has Wisconsin as the 2 instead of Dook.

I wondered about any home court advantage for UConn in the second round if that happens. Storrs is 418 miles from Buffalo. Closer than NWA to Nashville, say, but still a good distance.

No blood pressure problem with this. I would ole to see our hogs beat the mighty Zags.

I pay no attention to mock brackets. No way they’re accurate. By this time year most “experts” can get pretty close to what seed a team will get, but other than that, not so much. Of course, none of us know who will get upset in the 1-bid leagues or if somebody will sneak into the tourney by winning their conference tournament.

I just hope we don’t draw a really tough bracket. Eventually you have to play the best teams if you get far in the tournament, but I’d like two relatively easy games to start with. Past that, everybody is good or is playing exceptionally well. (e.g. ORU last year)

yeah no sense in placing a whole lot of emphasis on these things but these guys got jobs to do so I get it.