As their permanent rival. 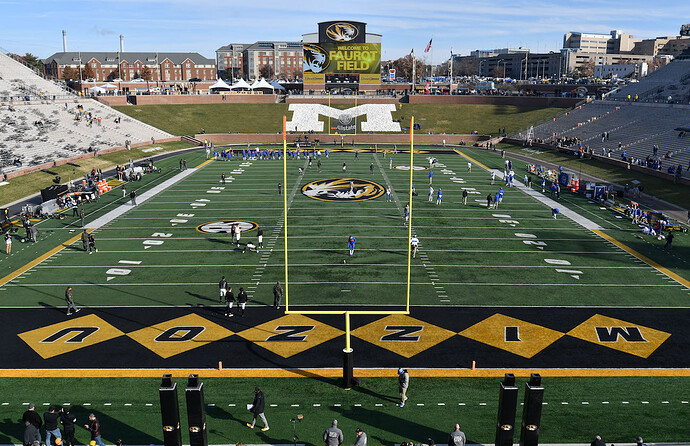 Mizzou AD Desiree Reed-Francois weighs in on the important issue.

I was surprised to read the other day that the 8-game format (1+7) seems to have a little more support right now than the 9-game schedule, though it’s close.

I do imagine if they settle on 1+7, we’ll get Missouri. There’s no way we’ll get Texas if that means breaking up OU-Texas as an annual game. The Hogs and Tigers will be matched pretty much by default.

I agree. I think we get Mizzou by default. OU and Texas will get each other, and A&M will stay with LSU. The rest of them make sense except for UK-SoCar; there has been some mention of putting UK with Misery as the two northernmost SEC schools and giving us the Chickens again, but I don’t think that’s likely. I could see putting Vandy with SoCar and putting UK-UT together, also. They flat out hate each other, more so than UT hates Vandy.

I don’t think 3-6 is entirely dead, and I think Greg Sankey wants it to happen and is bending ears on the subject, but he has some more bending to do. I’m hearing that we’re one of the schools favoring 1-7. Maybe HY is trying to get some concessions from the league in exchange for support for 3-6.

Andy Staples this morning called the 1-7 sentiment “loser thinking” (can’t say I disagree with him), and predicted that Sankey will bend ears this summer and before the first weekend they’ll announce a 14-0 vote in favor of 3-6.

Why is it loser thinking? Because the schools that want 1-7 (a) are afraid they won’t win six games and qualify for a bowl or (b) think a 9-game SEC schedule is just too tough. Or (c) both of the above.

Frankly, our schedule gets EASIER with 3-6. Because we won’t have Bama, Auburn and either LSU or A&M (or both) every year. Replacing Bama with Texas is a win. Yes, it gets even easier with a 1-7 and Misery, but if you’re gonna hunt with the big boys, you gotta get off the porch. Our goal is to be able to beat those teams. And we’ll still see plenty of everybody with 3-6, like every other year.

Also, we played a 10-game SEC schedule with a hamstrung roster and survived nicely in 2020. Won four (Jason Autrey took one away) and could easily have won two others. And our team is much better going forward than the one Sam inherited from Chud.

Finally, I agree with Mizzou on something…

There’s no way we’ll get Texas if that means breaking up OU-Texas as an annual game. The Hogs and Tigers will be matched pretty much by default.

Wish that we could relinquish the end of year Arkansas/Mizzou cross-state rivalry game. There is not much excitement in this game by either fan base & minimal national exposure after several years in efforts to turn this into a rivalry game.

Have hoped to see LSU be reinstated as our annual Thanksgiving weekend rivalry. That has often been a close & heated contest since we joined the SEC. Arkansas/ut have a long history & can continue playing, but makes better sense to renew the aTm vs ut Thanksgiving weekend rivalry game. That does not take away from ut vs OU traditional October Red River game during the October state fair in DFW. Perhaps OU vs Mizzou would have better success in evolving into a rivalry by playing each other at the end of the season. OU otherwise has no nearby opponent, other than Arkansas, as a potential end of year rival outside of ut or aTm.

If we go to a 3-6 model. I really like the idea of OU as our Thanksgiving weekend opponent. Would generate a lot of Arkansas interest but not sure how OU would feel about it. I wonder if there will be pressure on them to schedule OK state for noncon game annually?

I wonder if there will be pressure on them to schedule OK state for noncon game annually?

There are certainly plenty of SEC teams who reserve that last week for noncon – Florida-Free Shoes, SoCar-Clemson, Georgia-GTech. So it could be done. Whether Okie Lite will remain too butthurt to continue Bedlam post-departure is another question.

I don’t think there’s anything that will get Kansas fans to care about Prairie Chicken football.

True regarding KU- they could advertise the football season as “basketball on grass”??

It would not surprise me in the least for OSU admins to be so butthurt about OU leaving that they refuse to schedule them anytime soon, but pressure may be high enough from certain fans/boosters/sponsors/state politicians to make it happen. Might also depend on how SEC scheduling shakes out- I imagine it would be much likelier to happen if we stick with an 8 game conference schedule

Little brother A&M left, but they’re still butthurt; they are the ones who sprung a leak last summer to try to torpedo the OU-UT talks, and IIRC it was a 13-1 vote against admitting those two (and the 1 is in College Station).

I don’t like the idea of Mizzou being our permanent opponent. Yuck!

I understand your point. But I will take Mizzou as our permanent choice. We need a Vandy. on our schedule every year and if we win , we will find our rival given the teams in this league.

I understand your point. But I will take Mizzou as our permanent choice. We need a Vandy. on our schedule every year and if we win , we will find our rival given the teams in this league.

Totally agree. It looks like Sankey will get his 3-6 schedule but, hopefully, Yurachek will get to cherry pick our other two permanent opponents. I really hope we get TexAss and OleMissy as our other two. Let Mizzou take OU as one of its other permanent rivals and they can add Kentucky to get geographical connections. I really like TexAss getting us, OU, AND Ta$m as their permanent rivals. That will make the Teasippers panties wring into wads bigtime. I see LSU with Ta$m, OleMiss and, maybe, OU as theirs. OleMissy would have us, LSU, & MissState. Maybe Mizzou will take MissStake instead of Kentucky. That would leave MissStake with OleMissy, Mizzou, & somebody from the East.

I know it’s not gonna happen and I’m in the minority but I’d love it if Tennessee was a permanent rival.

I know it’s not gonna happen and I’m in the minority but I’d love it if Tennessee was a permanent rival.

It depends on how much or how little importance they place on geography. I assume they will try to make the permanent rivals (once they get past the historically mandatory ones) geographically close to help teams with travel and to try and create fan rivalries where they don’t exist now (like us and Missou.) I think Tenn sees Vandy and Bama as mandatory and possibly Florida too. They would be smarter to campaign for Kentucky than for Florida or us.

I hate that way of thinking. It’s so defeatist. Nobody nationally cares about Mizzou and that’s not a game anyone outside of fans of each school are going to tune in for. It’s not as good for recruiting as say OU, LSU, or Texas. To me, playing Mizzou is about as much fun as Memphis or Louisiana Tech.

But Memphis or La. Tech is not an SEC team. We get to chose those teams but we have to play who is given to us in the SEC.