Missouri State loaded at running back

They have more than this transfer. Interesting read on the new back for Petrino. 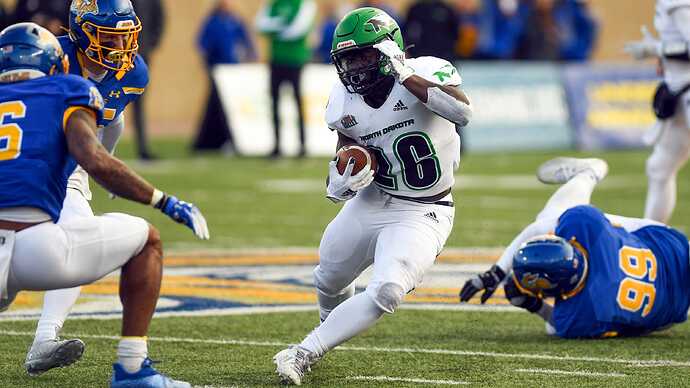 Why All-American RB Otis Weah is transferring from North Dakota to Missouri...

Missouri State will add Weah to what's already looking like a solid backfield for the upcoming 2022 season.

Man, his offense was always pretty good. I wonder if his success there will get him into a power 5 conference again.

I don’t know if Bobby can shake the Louisville collapse. The stuff that came out near the end and the next year at UL is prob gonna stay with him maybe more than Ark/Atlanta stuff.

While you know BP would love to come in and get a win, it’s not a real good spot on the schedule for Missouri State. Unlike last year, when they had Oklahoma State in the opener (and played them tough with a chance to win), this year they catch the Hogs in between two important games.

The week before they get a revenge game against UT Martin in Springfield. UT Martin knocked Missouri State out of the playoffs last year 32-31. The week after they play South Dakota State in the Missouri Valley opener, a team that went deep into the playoffs last year. While good FCS teams will typically have an emotional edge when playing Power Five schools, this is not a game that Missouri State will have all summer or even two weeks to get ready to play, and they have a more important game for their post-season hopes the following week.

I don’t think Petrino makes any sense for a P5 school in today’s college football landscape with unlimited ability for players to transfer, etc.

Why do you say that, Jackson? is it how he treats players?

I think if several of our studs had been free to transfer without sitting out early in his tenure they would have done so - some have said as much.

I’m not saying it would have been the right decision by them, but the transfer portal is an easy escape for young players that are struggling with being coached very, very hard.

Petrino at Arkansas didn’t treat anyone very well other than blonde volleyball players (and even that is questionable). Didn’t sound like he’d learned his lesson with what happened at Louisville. I agree with Jackson; he’d be losing people left and right to the portal.

I’ll be shocked if he gets a chance at power 5 again. He’s not the easiest person to be around from all the people who had to work with him on this board say. I know the players talk about how hard he was to work with. He’s a brilliant offensive mind but pretty much a narcissist best way I can describe him from what I’ve heard.

He’s a brilliant offensive mind but pretty much a narcissist best way I can describe him from what I’ve heard.

I could probably find a more descriptive word than that but Marty would have to take it down.

Oh yeah we all could for sure

BP failed to build a sustainably successful program at Louisville. Even his best teams, blessed with a future Pro-Bowl QB, did not win really big. That failure makes it a lot easier to decide that whatever bump in wins you get from hiring him in the first two or three years is just not worth the trouble long-term.

BP failed to build a sustainably successful program at Louisville.

I think we would have found rather quickly that he didn’t build a sustainable program at Arkansas either. Yeah, JLS let go of the rope in 2012 and then BB took almost two years to win an SEC game, but a big part of that was talent deficiencies that were there when BP hit the ditch.

BP was paranoid because he had a lot of personal issues going on and couldn’t hire a staff because he’s impossible to work for, wanted people who would keep his secrets, and everyone knew it was about to crash! His recruiting was lazy with lots of reaches and misses…

The interesting part of that John L season was the rash of injuries. Some missed for serious issues (knee, concussion, broken bones). Would that have been different with Petrino? Would the team have been in better condition? Tougher? Better strategy and tactics?

His game planning, adjustments and play calling was only surpassed by the way he built mental toughness. He was much like Holtz in that area.

I just don’t know how to figure different Coach in regards to injuries.

There was no way that team was gonna win 10 games. Defensively atrocious (and we all know that BP doesn’t care about defense, he got mad when they messed up his offense in practice). The defense got us beat against Monroe and several other games. In retrospect, we should have known we were in trouble when Jacksonville State scored 24 on us in the opener. 58 to the Aggies? 45 to Moo U?

Would he have developed BA faster? Probably, but BA turned out okay

I think you minimize what having a tough mindset in practice does to help the defense at least some. It’s the Roy Kent famous line: “We don’t know.”

Jeff…Fred may disagree with you on BA….

I really enjoyed the offense and the wins but I agree with Swine on where the program was headed.

Jeff…Fred may disagree with you on BA….

If there is such a thing as karma, some day Fred will find himself in a room with Bobby and Marcela Allen and have to explain his fixation on their sons.