Thanks Marty for getting on the folk from the athletic department that allowed that unsportsmanlike video to be played Friday. That’s not the type of program we want. Go Hogs! 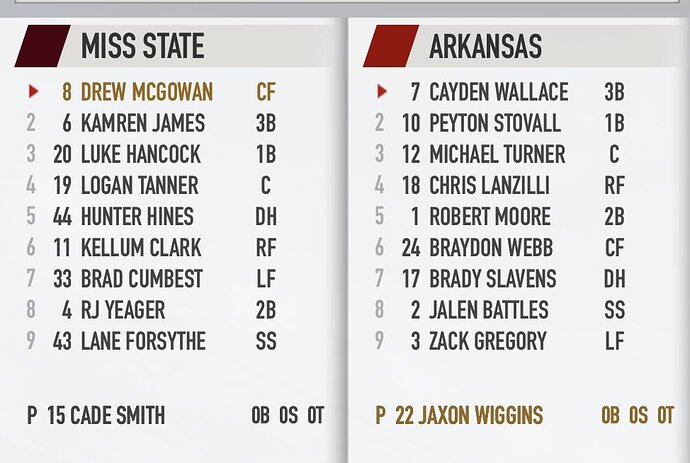 Need to keep the pedal to the metal. They lost the first two games at Georgia a couple of weeks ago and came out and pounded them 20-3 on Sunday.

Yeah, that’s the funny thing about baseball. Two lopsided wins are no predictor at all for the third game’s outcome

Yeah that could have happened anytime in the first two games. Their backs are against the wall today. The threat of getting swept will certainly motivate a team.
If Wiggins in on today and we keep hitting and play our usual great defense, we should get the sweep

Wiggins with a 98 mph on the corner I like that

Wallace has a cannon

Really nice play by Wallace for the third out. That was a long throw on the money

That MS pitcher owned us in the first

Wow! Blew right by three in a row.

As much as we faced our guys you think we’d be used to that. Evidently not.

Yep! Teeing off of Wiggins. Ending up being long outs, but still…

I hate the shift.