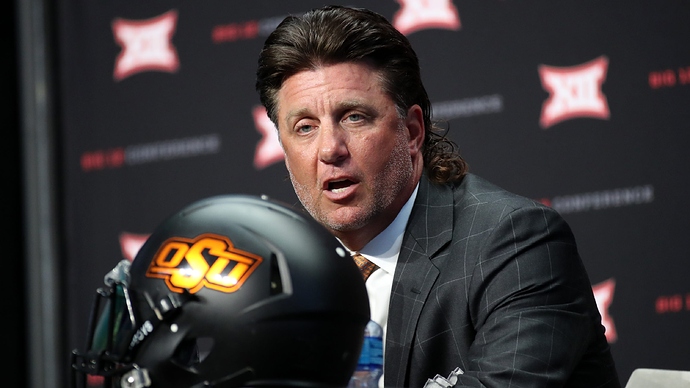 Opinion: Mike Gundy's latest ridiculous comments out of touch with reality of...

Yikes…ole Mike got ripped in that article. But I doubt he cares…

Geez, that’s out there.

ole Mike got ripped in that article

Sure it’s out there, but there is a truth as to the impact of “no ball” in Stillwater and in Tuscalooser–namely, the overabundence of motels, restaurants, and Huuuuuge apartment complexes will begin to dry up with no students and 100,000+ crowds coming to town. Lots of concern here in Tuscaloosa.

It is time to get back at it…mid May or early June is what they should shoot for. They wear a face mask for goodness sake. They could test all the players and put them in a quarantined building until all the practices are over. No outside contact. Meals prepared and served under strict supervision. It can be done. Let’s get after it. If essential workers can figure out how to not get sick (by all accounts) then surely a group of college athletes and coaches can figure it out.

The issue is going to be lawsuits. Everybody is afraid of ambulance chasing law firms.

If only it was as easy as just get back to it. News reports are virtual not in the trenches. The death rates is higher than the idiot Facebook post that continues to circulate quoting 1.6%. The last thing I would want is my child in a dorm practicing in mid May to early June based on the current data. Follow the data, follow the precautions.

Essential workers are very much getting sick. “Essential” in many cases equals “disposable” as in they don’t care if they get sick. Virus exposure rates among transit workers in NYC, for example, are sky-high. So are those for health-care providers.

Look I get that you’re worried about your business, but until the curve comes down (it has in Korea and China, hasn’t here) we’re still running the risk of multimillions dead, and the US economy/your business is gonna get clobbered regardless. There’s nothing to compare this to except maybe the plague in medieval Europe, and the economic structure then was far different. Spanish flu? H1N1? Child’s play compared to this.

It is time to get back at it…mid May or early June is what they should shoot for. They wear a face mask for goodness sake. They could test all the players and put them in a quarantined building until all the practices are over. No outside contact. Meals prepared and served under strict supervision. It can be done. Let’s get after it. If essential workers can figure out how to not get sick (by all accounts) then surely a group of college athletes and coaches can figure it out.

The issue is going to be lawsuits. Everybody is afraid of ambulance chasing law firms.

In your scenario, is college in session? Are the rest of the students in a quarantine situation like the athletes?

Kind of amazing/ironic that the loudest proponents for the athletes to come back because it hurts their business without them playing is also against athletes making compensation off their image and likeness.

Ambulance chasing law firms? You or a family member might need a lawyer one day because of an injury caused by the negligence of others. At that point, I’m assuming you would not refer to your lawyer as an “ambulance chaser.”

Swine…The models have all been wrong…crazy wrong as usual. There was never going to be millions dead, especially in the U.S. The same people pumping out climate change models are now pumping out COV19 sickness and death models. These models caused all of this panic and shutdown. They have gone from 2.2 million deaths to 60,000 deaths (the same as the flu). We need a vaccine and we will get one at some point. The flu shot is a crap shoot year to year. We need a guaranteed treatment or cure. We will get one that works for most people. Please don’t ever tell me what the communist party of China is reporting or doing. You are better than that. Essential workers outside of healthcare and New York transit workers are doing pretty well, so far. I would assume hospital/health workers would get a higher rate of infection. I guess your worst-case scenario should keep us all shut in until 2025. You actually have people suggesting we stay shut-in for 18 more months. That cannot happen. It will not happen. This is not about me and my business. This is about America and our ability to remain a nation that can provide enough economic activity to support ourselves and our families. I have contractors that work for me and there is no more work after this week. Small business owners are being ruined. Many don’t give a damn. Banks cannot go on forgiving payments, landlords forgiving rent, and the government can’t keep paying everyone to sit at home. What we are doing is unsustainable. I still believe H1N1 is going to claim more lives than COV19. I am 100 percent positive more people will have been sickened by H1N1 than COV19. I think the way we beat this thing is herd immunity. We need more healthy people to get it. We will never know the true death/survival rate because there is no way to know who has had it and never got tested. I get people are worried about their health especially if there are underlying health conditions. Those folks should stay home and not get out for anything if at all possible until there is a vaccine or 100% cure. My rant is about people not businesses. People are being destroyed by this shutdown. Now we are trying to make the virus racist. Why? Hmmm. I won’t even get into the whole cause of death issue. An article today said that only 1.9 percent of the deaths in New York didn’t have some type of serious underlying health issue. I should be ok as long this doesn’t last longer than 12-15 months. We have saved pretty well for the last 24 months. I have 200 head of cattle so we won’t starve to death either. I love life and I also love people. Millions of people are hurting and that hurts me. Gotta find some common ground we can all stand on 6 feet apart.

Boy…I guess i am going to get to unload a lot of my inner feeling on a sports board. I think the legal industry and jurors trying to right the wrongs of the world are killing certain industries. People/families should be fairly compensated for loss of life or injury. We are way past that now. The jury awards are out of control. You cannot allow a company to make Roundup for 40 years and then sue them for 250 billion dollars. It is either safe or it isn’t. If you don’t fall into the ambulance chaser category please forgive my depiction of the profession. No harm was meant. If you have someone in your office listening to a police scanner then we might have a problem. I won’t even get into attorneys fees or percentages of jury awards. They seem a bit pricy but I am not privy to the overhead cost etc of a large law firm working those types of cases. Pay people fairly but don’t go overboard. That money isn’t free. Someone is paying the bill. Insurance rates are based on jury awards.

Not an entirely unfair or inaccurate response. Successful lawyers are creative and push the envelope, just like successful people in other professions.

Lawyers are heavily regulated not only by ethics and rules of professional conduct, but also by judges and the rules of evidence at trial. For example, there is valid science supporting the Monsanto litigation. Valid enough, at least, to allow jury verdicts to be supported. The judge makes the call on that each trial, and he is subject to being reversed on appeal. So it’s not Willy Nilly. There are very stringent causation standards that a plaintiff must meet at trial. Maybe, just maybe, Roundup really does cause cancer. And maybe a few creative, hard working lawyers have done the public a benefit by shining light on it.

Don’t think for a minute big corporations always do the right thing. They cover up stuff. History is replete with that. Look at asbestos.

I understand the lawyer bashing on one level. There are bad eggs. But lawyers also do some good in this world and do it the right way.

That ends the discussion on bringing back athletes in May or June.

If - and that’s if - the NCAA allows teams to start practice early, then they could come back in July.

But if not, it’s August at the earliest.

You keep telling yourself whatever makes you feel good. The reason there aren’t going to be millions of dead are those same social distancing measures you hate. And if we shut those down too soon, it’s not too late for the curve to un-flatten. Do we need to maintain social distancing until the vaccine is ready? I don’t know; I’m not an epidemiologist. But it’s possible.

When I first read this thread I thought of you hawgjawbend…and assumed you’d jump in on the conversation. I’ve spent too much of my career talking to lawyers, doing depositions and testifying in Federal court. And much of it was fishing expeditions by folks looking for money. It’s just life. My late niece was a lawyer. Very well respected in NWA for her integrity and genuine care for her clients and strict adherence to the law. At her funeral almost 1 year ago a respected judge bragged on all the qualities I mentioned. I had many conversations with her about tort reform and we swapped “lawyer jokes” regularly. My point is that I’ve spent a lot of time around lawyers and have much, much respect for what you do. It’s not an easy profession.

And like all professions their are good and bad apples. (See college football coaches). Yes sir hawgjawbend you’re comments are right on target on this subject. And this is from a guy who worked for said “big corporations”.

This is going to hurt first year coaches more than anyone. I know that is not breaking news. I feel for CSP. This may be a tough year if they lose 15 practices. There could be a positive. Maybe the players have worked on their bodies and will be in great physical shape when things get started.

IF the decision is made to move ahead with football this fall how could the NCAA not allow extra fall practice days? Kids will need condoning time missed now.