Awesome news for Dusty. He’s been killing it in the G-League this season. 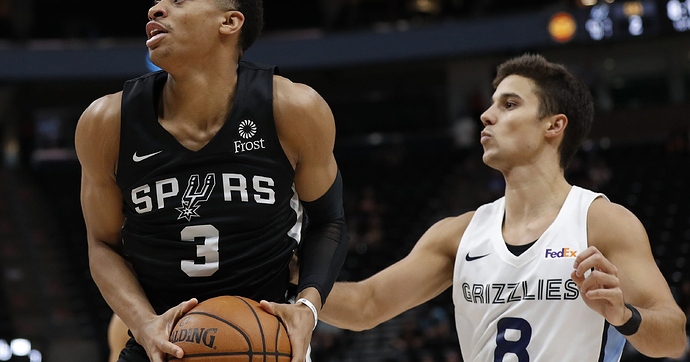 Hopefully, this second 10 day engagement has a better ending than the first 10 day contract and he gains a permanent spot on the roster. The last one ended in a waiver.

As the 15th man he may not play in a single game but he’s getting that prorated NBA pay for 10 days anyway.

You gotta give the young man credit. He is trying to live his dream of being an NBA player. He won’t have any regrets that he didn’t give it all he had.

I really hope he can stick for a while this time. He’s worked as hard on his game and on his development as anyone I know. I watched him play for the U-17 Wings Elite two straight years in the Nike Elite games in Hampton, VA. The difference between his rising Junior and Senior years was startling. I visited with his dad, Gerald and talked about the difference between those 2 years. His Dad said he spent nearly every day working out with a trainer and transformed his body. Gerald said he had gained 25 pounds of muscle and grown 2 inches.

Dusty also worked his but off to improve his overall game the 3 years he spent in Fayetteville. His journey to constantly try to improve his basketball game reminds me of the journey Mason Jones has been on since he was a 270 pound Senior in H.S. Dusty just started his journey a couple years earlier in life. I hope both of them attain their dream of playing consistently in the NBA,

Dusty has put in the work to make it! I’m hoping things work out for him.

I have the highest respect for players like Dusty, Mason, Qualls who put in the hours in the gym to build their game every year. They make coaches look good.

I remember when Mason first arrived on the campus, there were stories about how he spent countless hours in the performance Center. He surprised everyone with his three point shooting last year. It appears he has put in even more time prior to this season.

Who are some of the other guys in Razorback history that transformed their game while here?

Who are some of the other guys in Razorback history that transformed their game while here?

The first name that jumps out at me would be center Nick Davis. It’s a little different than the players mentioned. He played in the late 90’s for Nolan. Did little to nothing his first couple of years, and then in his senior year he burst out and averaged a double double (or close to it) for the season.

He was lightly recruited and ended up winning the SEC rebounding title. His performance doesn’t strike you as much as the three listed, but certainly his development is to be applauded.

Kikko Haydar is another one who far exceeded expectations and so did Manny Watkins.