Since Davante Adams left, they need a new WR1. He could do worse than catching passes from Aaron Rodgers.

That would be a Great fit for him.

I hope he is a Steeler! Hinds Ward #2

I would love to see him in GB. I could easily pull for them and I think they are a good enough team.

The Athletic is thinking the same thing. Describe him as a linebacker sized Deebo Samuel. 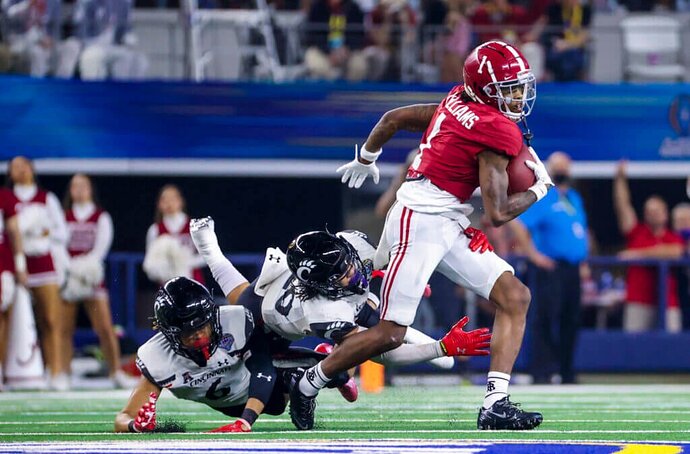 Who will the Packers target with their new first-round pick at No. 22? We...

The Packers acquired pick No. 22 in next month's draft from the Raiders (plus No. 53) in exchange for Davante Adams. Who should they target?

I have always liked the Deebo comparison.Green Bay would give him a chance to play with a great team and a Hall of Fame quarterback don’t think you could get a better scenario than that for Treylon

4 WR’s predicted to go before Burke’s

Those guys may get a bigger signing bonus but Burks would have a great chance to succeed on the frozen tundra with a couple of years of Rodgers throwing him the ball.

I think Burks will prove all these ratings and naysayers wrong.

I saw that as well. No way I’d draft 4 WRs ahead of Burks. This kid is tough and he knows how to work! That should translate well to the league, barring major injuries

I saw somewhere that several teams in that range of the draft were glad to see Burks’ relatively unimpressive performance at the combine and pro day, because it may allow him to fall down to them. Green Bay was one of those teams listed.

Not a fan of GB qb so I hope he goes elsewhere. Mock drafts are fun to read but seldom accurate. Hearing his lack of great 40 time is costing him. Others ahead are blazers. He is just a great football player!

He is on a “30” visit at the Cowboys, obviously Jerry and Steven have watched him for 4 years and know him already well John Steven 3rd string QB growing up with him.

I saw one for Arizona today

Too cold to play in Green Bay. I have seen projections for the Steelers and several other teams. Burks won’t last long…those other teams have seen the films of him running away from the SEC corners. He is a physical stud with great hands and good speed.

Saw somebody project him to the Eagles at 19 this morning. Combine performance hurt but not that much. He’d have to fall to 22 to get to the Packers.