It’s paywalled but I can save you the trouble: Treylon Burks isn’t in it. Several WRs, including the Dotson kid from Penn State who also opted out of the bowl, and Williams from Bama, but no Burks.

I don’t have the time or the energy to do it but I feel if someone compared Kiper and McShays mock drafts to real results, you would find that they are average at best after the first few players. I read a lot of mocks just to see what the Steelers are projected to do but most end up being way off. Last year was the exception as everyone had them taking Harris. Bucks can fall to us in the 2nd and I would be thrilled!

These guys make a fortune but are never held accountable! they should be critiqued and slammed when they are not close to being right and if they are spot on given their dues but I pay no attention to what they predict

I don’t know many who do predict the draft with accuracy. I am not sure the teams know who they are going to draft with certainty at this point. Team needs play a part. But sometimes it’s about agents.

Exactly,why I have never seen the point behind these things,they can get the obvious ones right but little else.

It’s paywalled but I can save you the trouble: Treylon Burks isn’t in it. Several WRs, including the Dotson kid from Penn State who also opted out of

He’s going to be a freak at the combine and be a 1st rounder. I saw one, today, on The Athletic that had him mid first round to the Browns.

Anywhere but there. Baker the interception maker may be gone and then it’s back to long tshirts with names on it.

Mel Kiper lost all credibility when years ago it was determined that he was in cahoots with certain agents and he was rating those agents players at a higher level. Once you do something like that your word is shinola. I guess too many people have forgotten that about him. I wouldn’t trust him to sell manure and thats even if I could see and smell it first.

Yea I take Kipers mock drafts with a grain of salt. His collusion with agents added to this.

He’s been wrong in the past. And he’s wrong about Burns I bet. If not, someone will get the steal of the draft in the second round.

It’s entertainment, time-filler for ESPN when the cash-cow that is NFL football is in hibernation–nothing more than that.

This. You can bet NFL GMs are NOT using Kiper’s draft ratings to make their decisions. It’s all just hot-stove league fluff.

If I were an NFL owner and I heard my GM say, “But, what does Mel Kiper and Todd McShay think about him?”, I immediately know two things:

Yes, but are they getting information from him about who to draft?

I suppose he could give a barometer for interest of other GMs, but is that really reliable? 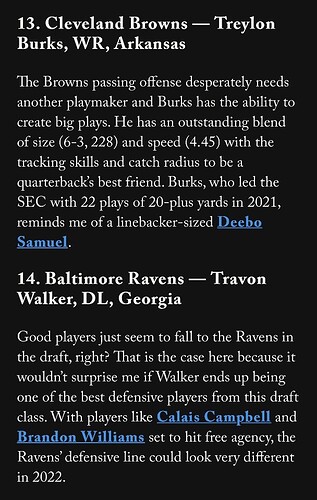 I believe the more exposure Scouts and GMs have with Treylon, the higher he will climb in the draft.

IMO, the current NFL WR, that Burks best compares to is Mike Evans. If he’s single covered, he’s open. Just throw it to him and he’ll come down with the catch. He will run through or around corners and safeties. Deceptively fast and can get separation from DBs. All traits that Treylon also has. I believe Mike was a top 10 pick in the draft.

I hope that wherever Burks lands in the draft, it’s with a team with a solid QB and OL. He’s an NFL All Star in the making.

I would think if that was true, ESPN would drop him.

I read he is friends with almost all of the agents. Some get mad at him when he does NOT rate their clients highly.

I’m guessing he’s right enough and that some are so easy to project that he does have some credibility with both the agents, teams and his bosses.

It is easy to mock his voice and hair! It is Assembly of God preacher’s hair.

CBSSports. com mock draft has Burks going mid-first round. The NFL is about quarterbacks, pass rushers and great wide receivers. Burks is certainly that. He is a dominating beast of a receiver. Kyper is wrong about Burks.