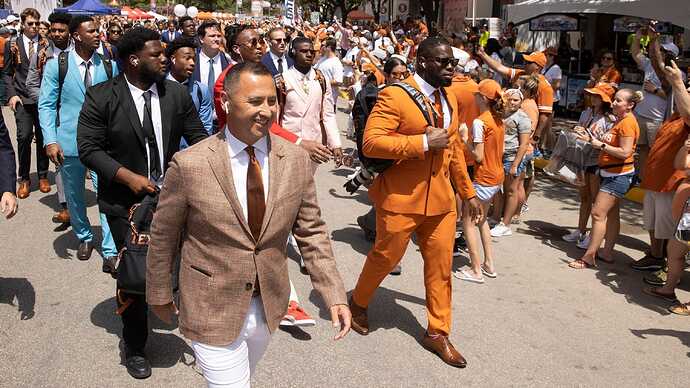 Texas football coach Steve Sarkisian told reporters to ask players about the culture battle. So they did.

Don’t you just hate to see problems in the longhorn locker rm. I hate that almost as much as I hate that their downward slide started last season in Fayetteville, AR.

Come on over to Arkansas Big boy we got the culture you’re looking for!!

It is amazing how culture works at any institution. Way off topic, but I grew up going to a summer camp. The thing I was worried about more than anything else my first year going (as a 9 year old) was “hazing” (I didn’t know the term, but I understood the concept). It didn’t happen. It was not in the culture (unlike my Boy Scouts experience, where it was in the culture). The older kids at camp had mostly been there since they were 9 year olds and they had not been hazed, they knew hazing was not done or tolerated, so it just didn’t happen.) When my own sons went to the same camp 30 years later, it was still the same. It wasn’t in the culture. It just didn’t happen.

Sorry for the off topic story, but I do think it somewhat fits. If the culture of a program is “me first, team last or not at all” that will stay the same year after year. How to change that? Not sure. I am sure it is very hard.

I’m so sad to see these type of struggles in Austin. I’m stunned that the Longhorns stars hang out on Sixth Street. Just stunned and saddened. (Sarcasm alert.)

Texas-ex, here. UT football program is a mess and has been lost in the wilderness for more than a decade. Not sure the program will return to the consistent level of winning it enjoyed under Coach Brown during the 2000s. City of Austin has changed, too, and not for the better in my opinion. Wife (also a Texas-ex) and I have a daughter enrolling at UA this coming Fall 2022 semester; we are thrilled. WPS!

I’m thrilled right beside you.

If DKR Memorial Stadium catches fire, I hope it takes awhile to burn out.

What’s the problem in Austin?

Almost makes you want to come out of retirement so you can write about their woes, doesn’t it?

Well for starters texass university is located there.

If playing football for the Hornies is fourth or fifth on the list for many players, wait til you jump into the SEC… it will get a lot easier.

Nothing at all, if you like Portland, Seattle, and San Francisco.

That’s the coaches dang fault. You tell the media to go ask the players about culture yet you don’t sit down the team first and set guidelines before you turn them loose then that is your own d@&# fault if you ask me! That guy just answered the questions. Would love to have him in our locker room as he would be a great fit to our great culture!

Basically, he told the world, “Our coach can call plays, but he was not a HC at SC and he’s still not at UT.”

That was a loose translation. But I think it was on target.

Sark could be leaning over the edge of the wagon.

Success starts with leadership. And sometimes a good leader has to dismantle an organization and build back from the ground up. Not sure it’s that bad in Austin but if so the Teasippers will not allow the time that takes to any coach.