McBride- why not eligible until 1/21?

I don’t understand why he would not be eligible until Jan, 2021. He will not have played a minute in the 2019-20 basketball season. He will not even be a team member during that season. Why would he have to sit for a basketball season and a half after transferring? Doesn’t seem remotely fair to McBride. I thought red-shirt seasons were based on that sport’s season, not on Academic years. I certainly could be wrong though.

Are we certain on that Jan, 2021 eligibility? If so, can it be appealed to the NCAA?

He’s not redshirting for a year and a half. He isn’t transferring until Dec/Jan (end of semester). Then he has to sit for a year (Spring 20, Fall 20), making him eligible in Jan 21. It is an unusual circumstance so he maybe able to get a waiver, so he can play Jan this year

So, right now, red-shirt seasons are based on academic years, not on the sport’s season. I guess this is the first time I’ve seen a case where a player would have to sit out more than one full season after a transfer. I’m not sure of the exact timing of his release, but he may not have even been in an official practice. I guess basketball is the only major sport that this could happen. Still doesn’t seem fair.

To my knowledge, he is still enrolled at Kansas and will be until December.

Then he can transfer to his next destination and would have to sit out the normal NCAA year unless he can get a waiver for the trouble Kansas is in.

It’s about going to class at Kansas, not playing games at Kansas.

Yes, I hadn’t thought about the basketball scholarship. If Kansas is paying his first semester with the scholarship, then it makes sense. As I posted earlier, this would only happen in basketball because football and baseball seasons correspond with college semesters.

Still would love to get McBride. He’ll get to practice with the team the last 2/3rds of this season and through the OOC schedule next year, and then be ready to play for the SEC 2021 schedule and post-season.

I’m almost certain he is no longer enrolled at KU, and has been granted a release. (Haven’t heard that from him or his family, just connecting the dots of what I do know.)

I am thinking that a waiver to be able to play next Fall will be almost assured unless KU fights the NCAA (which seems to be their intent) and drags out their sanctions into next summer. But who knows how long that case will take.

I think it’s a fair rule. If McBride is allowed to play at Arkansas this season, imagine the rampant transfers that would occur because a player dislikes his situation after a few practices and decides it is not the place for him.

This is the closest situation I could find that would seem to fit him - Mitchel Robinson at Western Kentucky,

Getting a full release from WKU was only step one for Robinson if he wanted to play college basketball somewhere else in 2017-18. Because he took classes at Western Kentucky and participated in practices with the team, he would also have to receive a waiver from the NCAA in order to play for another Division I team without having to sit out a season. Those waivers are typically reserved for extremely rare circumstances.

If Robinson wasn’t granted that waiver from the NCAA, his options would have been limited. He could have gone overseas — although finding a professional home abroad on the fly isn’t the easiest thing to do in the world. He could still transfer to another Division I school and sit out the 2017-18 season before becoming eligible in 2018-19 (unlikely). He could have gone to a junior college, be eligible to play immediately and compete in 2017-18. Or he could have simply spend the next few months working out on his own before putting his name in the 2018 NBA Draft.

Seems weird that KU wanted McBride, he got there and then they seemingly pushed him out right away. What gives?

“Today, September 20th, 2019, I am leaving the University of Kansas basketball program,” McBride wrote in a note posted to Twitter. “I decided that the program was not a good fit for me. I will continue to pursue a future basketball career. I would like to thank the basketball staff at KU. Most importantly, I would like to thank my family, especially my dad, who has supported me through this decision.”

“Issac, who we all call Mackey, can play point, but he’s a combo guard who can score,” Self said. “When you watch him, you are so impressed with his range, quickness and explosiveness and his ability to elevate on his shot. We see him as a guy that can come in and obviously give us depth on perimeter shooting. He is a guy that can just score the ball. We haven’t had too many here like that, a natural scorer. He’s a combo guard that can jump up and make a shot wherever he is on the court.”

“We are all disappointed that Issac made this decision, basically on Tuesday,” Self said through a KU athletics release. “After discussing with his family, everybody came to the conclusion that this was not a good fit. We wish Issac the best.” 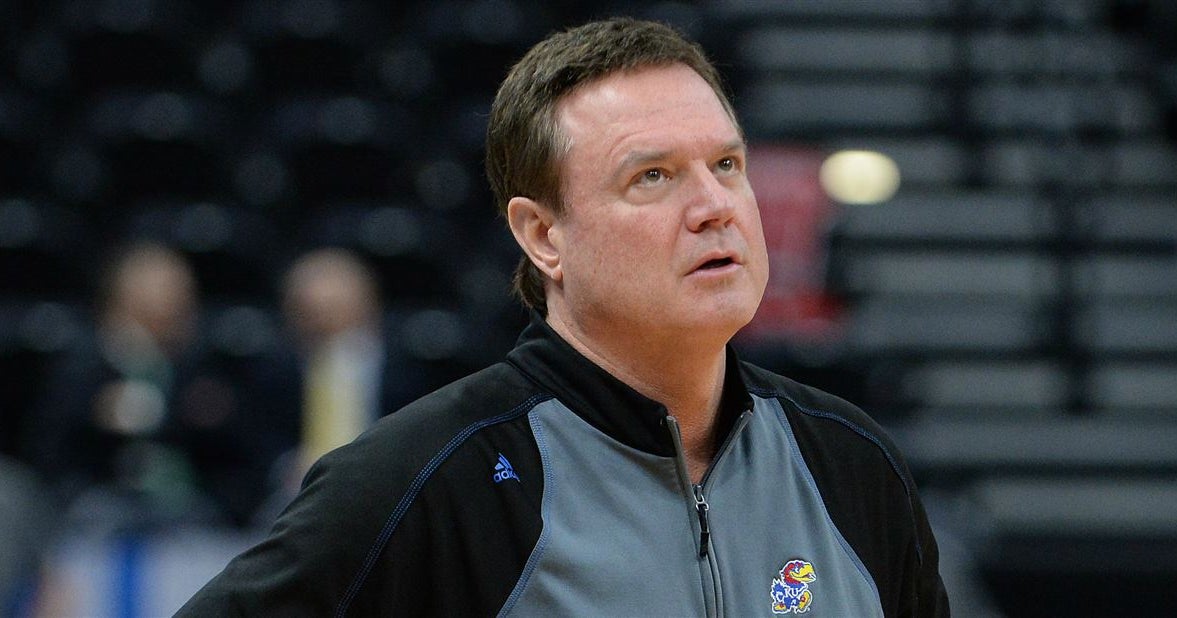 KU basketball has announced the departure of one of its incoming players.

Knowing Bill as I do, he wanted Issac to stay.

Not sure where the forcing out theory is coming from.

When the story broke, I kept thinking he was homesick, I keep hearing similar things. Not saying that’s for sure the reason, but would explain “not a good fit”.

I have posted several times that Mackey always wanted to be a Razorback. But, IF he ends up at UVA, we will be well on our way to confirming that homesickness and lack of top tier ability were not primary reasons for leaving KU.

Find the commonality between Issac McBride and Tony Bennett, and you might be able to connect a couple of dots.

Don’t know about commonality with Issac, but the first thing that jumps out at you about Tony Bennett is defense. It’s almost a consensus that he’s the best defensive mind in college basketball.

Now, if it’s personality traits, Tony, at least in public, is always cool, calm and collected. That’s kinda the opposite of Bill Self. Maybe that’s the commonality with Isaac?

I can see the dots. Seems like a match, knowing McBride and what people say about Bennett.

So how did his visit go? Didn’t he visit this last weekend. I didn’t see an article.

He has not made any comments on it yet although we have called and texted him about it.

Why couldn’t a player cite the NCAA infractions in his request to transfer from Kansas and be immediately eligible upon arrival at the new school?

First, KU only got a letter of allegations, to which they have 90 days to respond. Sanctions will come later, unless they successfully appeal.

Second, to the best of my knowledge, he is not enrolled anywhere at present, and cannot submit a waiver application until he signs a letter of intent somewhere. However, I think since he practiced with KU while enrolled and taking classes, he loses this semester to them, and the clock starts on his 1 year of ineligibility at the end of this semester (hence the Jan 2021 date).

My opinion is, if he is successful with a waiver, he will probably still not be eligible to play in games until this time next year, because of the time delay with NCAA waiver review plus the ongoing saga with KU. Although I guess he could try to apply for the waiver ASAP (after signing) and hope the NCAA will grant it quickly, assuming they have firm intentions of coming down hard on KU (which it seems to me is likely after what they just did to NC State & GT for much less serious infractions). But, does he even want to play starting in January of this year, and would Muss (or his new Coach) want him to burn a year of eligibility and only get part of a season?

You have summarized it well. That is the way I see it.