I am told ticket packages for both games and the golf tournament will go on sale tomorrow. I’ll be on the road to Fayetteville so I hope I can order in time. 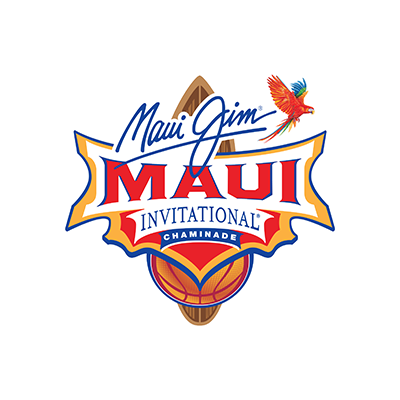 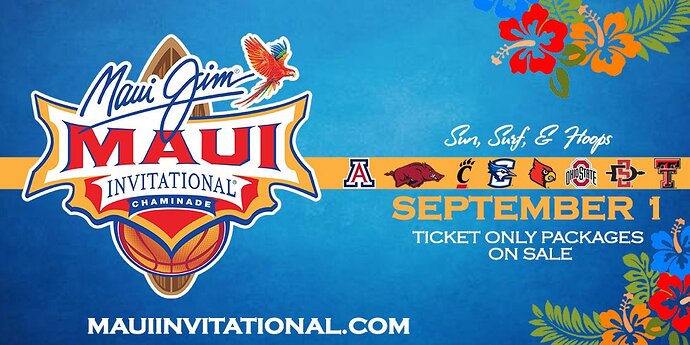 Anybody check the prices for tickets to the Maui Classic games? Holy cow! More expensive than the plane ride over there.

I whiffed on tickets today.

Looks like I’ll be parasailing and wrestling sharks all week instead of watching the Hogs.

$545 for Arkansas general admission per ticket, but they are already unavailable

Hmm, where did you find $545 airline tickets to Maui?

Does anyone know if in past tournaments individual tickets have been available to buy or were there people selling outside gym the day of games? Stubhub? I desperately need 2 tickets for family that decided to go after we bought the package thru the UofA.

In case anyone wants a link to the stub hub tickets: 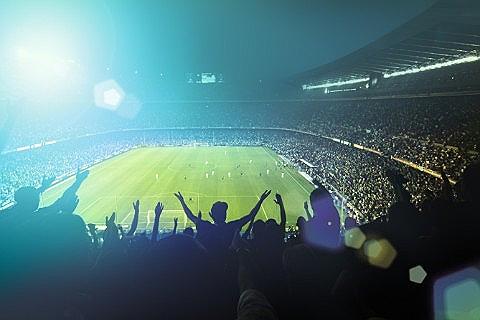 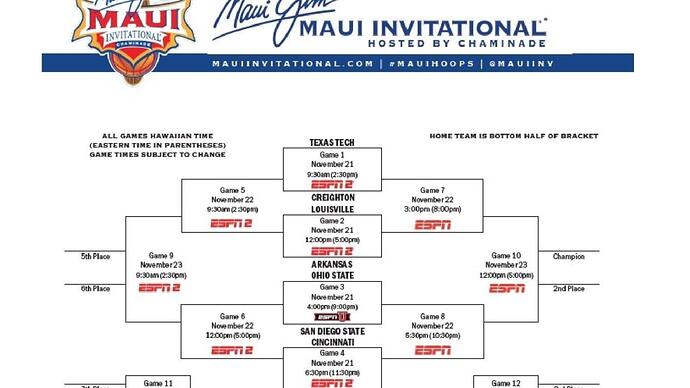 The 2022 Maui Invitational is set for Monday, Nov. 21 through Wednesday, Nov. 23 in Hawaii. Check out the bracket and schedule here.

Our round-trip tickets from LAX - OGG were $350 each. We used a BOGO ticket offer from Delta to fly LIT-LAX round-trip. The first ticket was $432 and the second ticket was taxes only.

According to an email from Maui Invitational, their corporate partner Epic Seats might have tickets. (epicseats.com)

We went to the tournament in 2005 and 2013. I remember thinking 2013 would probably be the last time we went because the tickets were over $100 each. I gulped when I clicked “Complete Purchase” today, but I predicted the tickets would be as expensive as they are.

A lot better than flying out of XNA. We were going XNA to LAX to OGG, but American Airlines decided to change it for us, now XNA to DFW to OGG, at about double your cost, lol.

Aloha,
Meanwhile, I am spending my limited discretionary income by traveling from Oahu to Fayetteville to visit my pair of UA students and attend the LSU and Ole Miss games. Will return to Oahu on Monday, the first day of the tournament. Shall watch the games on TV and play golf on my local courses. Oh well.
I love Maui. My favorite island. FYI, there is now a Chick Fil A at Kahului, Maui. If anyone needs a fix!
UA…Campus of Champions

Got 2 tickets today. Went on the minute the sale opened and watched the thing circle for 2 hrs (it said it would take 3 min.) Then had to catch a plane YYC to DEN so hang up. Went back on line the second the wheels hit and had 2 tickets for 3 games by the time we got to the gate. Go figure!

I found it interesting that after growing up in El Dorado, attending UA and then playing for Calgary in the CFL, Wayne Harris chose to remain in Calgary for the rest of his life. Canada even put his image on a postage stamp.

Spent a lot of time in Canada this summer and it seems YYC has been a second home. Calgary seems to be a nice place, but I have spent most of my time out in the farm country (big, big country). Love the farm and ranch people out there, mostly aerial applicators. Don’t look to be back until Nov., just before heading to Maui.

I’ve been to Ontario and Quebec but none of the western provinces. Beautiful country, I hear. It’ll be getting chilly in November when you go back, I suspect.

I don’t keep up with the CFL that much but Thumper is the only American I know of who went up there to play and never returned to the U.S. His son is now the head football coach at the U of Calgary (mascot Dinos, I kid you not).

Did not know that.

There is a reason why they play football in late summer and early fall. They tell me in early Nov (between just N. of Calgary) it could be very nice or it could be full on winter. I was there in late
Sep. a few years ago, and got in the middle of a snow storm. The locals said that was rare.

It is very pretty around there and the Canadian Rockies are spectacular.