Matt, who will be Starting P vs OU?

I think Noland or maybe Monke

Yeah they have given up quite a few runs this yr , hope we show up with our hitting shoes on

Phil said the Clips were 6-6 on the season going into today’s twinbill with the Puppies.

Noland is my guess, but that’s just a guess. It will be announced tomorrow.

This may be a game where the ball get pasted on after just a couple of innings at a time.
The bull pen will be on will call! I would love to see Noland and Wicklander get it rolling on the mound.

Yes, it will be Wicklander. 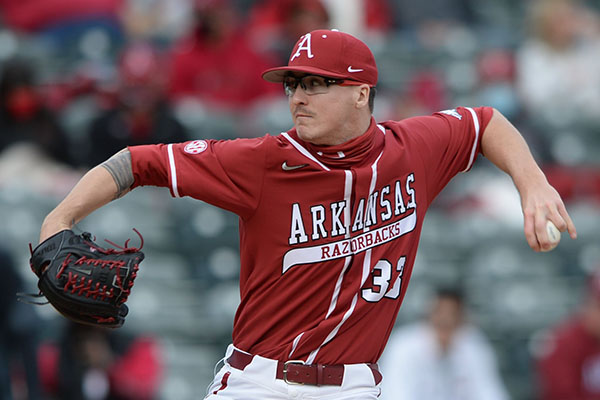 Wicklander to start Tuesday vs. Sooners

Arkansas left hander Patrick Wicklander will make his first start of the season Tuesday for the Razorbacks’ home game against Oklahoma.

Shocker they would throw a LH…

As long as our lineup is so overwhelmingly LH, that’s what we’re going to see.

that’s the thing, we are not overwhelmingly LH, only have 3 because Moore and Opitz are SH,the problem is the offspeed stuff.everybody seems to have trouble with LH that change speeds and even RH as we saw yesterday,this team has to learn to drive the ball the other way and forget about pulling it unless it s a mistake,They have been horrible pitching but looks like we are getting one of their best and we throwing a guy who we have no clue how he willl pitch…expecting a very tough game,just hope Wick is on and keep us in the game,we did hit a very good LH last week so maybe we are figuring them out some…we will see tomorrow