Matt - do you know if Auburn ever released his salary/ contract details? I’m curious how much of his buyout is being off set.

It hasn’t been released yet.

Did CM ever make a formal statement to HogNation other than what he said in his speech to his new players?

Did CM ever make a formal statement to HogNation other than what he said in his speech to his new players?

No, he never issued a statement after his firing. The first interview with him after the firing was when he was introduced at Auburn.

Just a guess…I am guessing he blames the players for him getting fired. It was not poor coaching or development.

Moorehead released a very gracious statement as did Willie Taggert after his dismissal by Florida State.

Only the Texas Aggie is arrogant and ungrateful enough to collect his millions and not say one damn word of thanks to the fans that invested in the product AKA steaming pile of excrement he put on the field.

Agree…they are all in Dallas laughing at us right now. I am betting momma does not move to the plains because Chandler will be at OU. If she moves and doesn’t have a home in Dallas I will be shocked.

Honestly, did you really want him to have a press conference? Didn’t think so.

Personally, I don’t care either way as my opinion of his was less than stellar when he was hired and by the time he left he had proven himself to be the emptiest of empty suits.

Just making an observation that of the three second years coaches that were fired, two of them released very classy statements thanking the universities for the opportunity, fans that supported the program, etc.

One guy high tailed it out of NWA without one word of appreciation for the opportunity he was given and the millions he’s yet to receive. Just because I and many others thought he was a fraud doesn’t mean there weren’t thousands of others that believed in him, supported him, invested in season tickets, etc. For those fans, the ones that supported him, a simple thank you was just too much to muster.

An observation about class - or lack thereof.

Leaving without being grateful is class less, I would rather him said thanks for the opportunity and say that he needed more time than to say nothing. WPS

They’re using their 14 days, and then some, lol.

No, you are just being petty.

No - leaving without publicly thanking/acknowledging the programs’s supporters while still collecting millions is being petty.

Taggert and Moorhead had the good sense to say thank you for the opportunity. Bielema did this and so did Petrino.

Chad’s momma and daddy forgot to teach him about manners or somewhere along the way he forgot the lessons.

Have to agree with Jackson.

He doesn’t owe anyone anything, it’s just kind of a common respect you see by coaches.

Of the 3 coaches mentioned, he by far had the most reason to be fired. The other two could’ve easily been more bitter about it and not said anything, especially Moorehead.

I don’t think it’s a good look for Chad. Makes him look Classless.

The ones who like Jackson and others here that are ripping him would have ripped apart any statement issued. I am either way on right way to do it. You really can’t win on this kind of situation. Whatever he says is going to be diced and mashed upon and proven insufficient. Only thing would make anyone happy is if he said I’m giving your money back. And none of us would do that.

I watched CM a couple of times after games and quickly saw he had zero creativity and even less energy when speaking. Everything that crawled out of his mouth was canned coach speak and he was even limited in that saying the same few phrases over and over. He insults the term boring which fits exactly what kind of team he put on the field. No wonder he lost the players early in the process quickly followed by the fans. He would have to hire someone to write a letter to the players and fans because his imagination isn’t capable.

No I wouldn’t Clay - again, I don’t give a damn what the Aggie does, but I would not have ripped him for saying thanks for the opportunity, I tried my best, and thanks for supporting the program.

I just know when you have thousands paying your freight via hefty donations, tickets, etc. to slink off with millions with nary a word is not indicative of class IMO

PS If you can find any media member or fans criticizing Moorhead’s statement I’d like to see it. It’s being acknowledged as a classy move - which it is.

Actually they did say something! 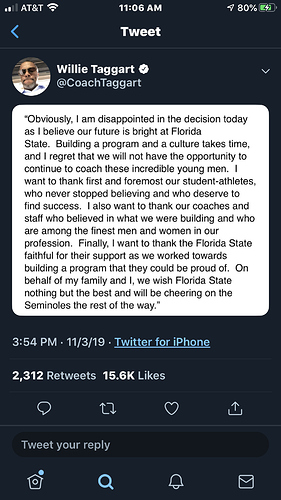 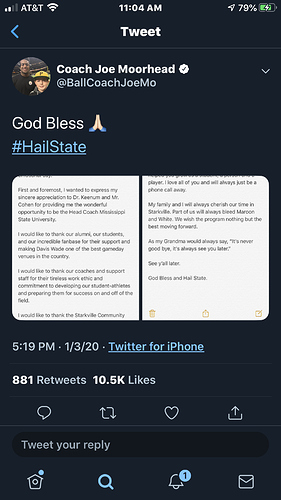 I know, I’m saying they said something and had a lot more room to be bitter and not say something than Chad.

I think them both having nice statements, made the optics of chads nothing, a lot worse.