For all you naysayers that said that Mason Jones wasn’t athletic enough for the NBA he just went for 24 on 6-8 from 3. He can flat out play at any level! 6 rebounds and 4 assists.

Good on MJ… very few have ever worked as hard as he has to develop his body and skill.

We are seeing now just how good Mason was for us. Anytime you can put up 24 in a NBA game you can play!

Determination and it was all Mason making the decision and used everybody else’s doubts about him to just drive him more. Got to applaud Muss for turning him loose last year.

It was my position that Mason was more athletic than people gave him credit for being. It seems that people mean “jumper and dunker” when talking about being athletic.

But, I think it takes a ton of athleticism to take SEC athletes to the rim and finish on them over and over, even when they know you’re going at them.

Likewise, creating space and finishing shots at all 3 levels takes athleticism. We saw that over and over.

But, it’s a group-think industry. Tons of 6-1 players who can’t play get scholarships over 6-0 guys that can dominate those 6-1 guys.

The same goes for the draft. A guy who dominated the SEC and whose game translates well to the NBA doesn’t get drafted and other guys who can’t shoot a lick or who didn’t even start for their average college teams are drafted based on measurables and projections.

It’s funny. There is a reason certain organizations win and others are always in the lottery.

Mason didn’t get drafted but he landed in a good spot. I don’t know if they knew Harden wanted out yet, but there were vacancies available.

Here’s a story from a Rockets site today. 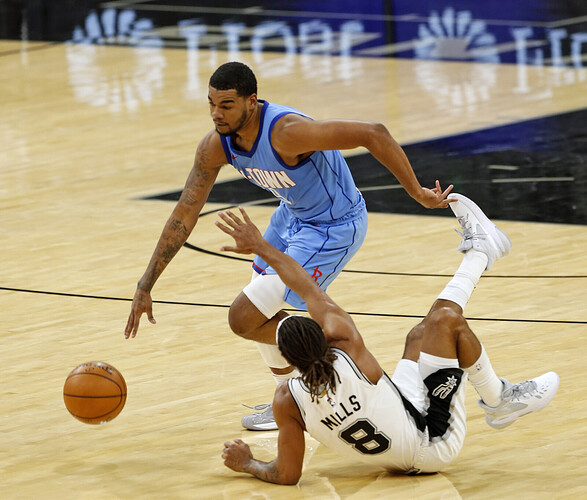 Honestly, I’m not sure Mason could have landed in a better spot. Pretty sure if he was still here, we would be undefeated, because he is 100% dog. I’ve invested a bit in some of his autographed rookie cards. I think he will play a long time in the NBA, because of his heart and that redwood on his shoulder.

I’m not that surprised that Mason surprised everybody. He just surprised a little sooner than I expected.
A lot of the doubters are jumping on the Mason Jones bandwagon now.

Mason was a scoring machine last year. He was a good 3 point shooter, had a nice mid-range game and could drive to the hoop. He has great offensive skills. He was also a superb free throw shooter. What is not to like with his offensive game? He is suited for the NBA game. He was also a leader on this team and wanted the ball in tough games. I expect him to have a nice career in the NBA.

I’m not sure any player has worked as hard between their Sr. year in high school (270 lbs) and his Jr year in college (220 and nearly chiseled). Not just on his body, but also on his basketball skills.

time will tell, but I really think Mase is going to have a nice, long NBA career. If you want to know how I feel about it, just read Notorious above, he said my thoughts better than I could have.

so nice to have Big Dan, BobbyP, Mase and IJoe in the league now.