Here’s a writeup from his 20-minute interview on The Morning Rush today: 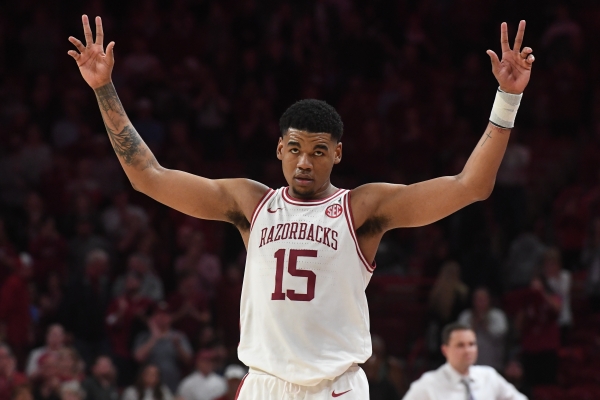 Mason Jones: Good chance I stay in the draft

In a 20-minute radio interview on The Morning Rush on Thursday, Mason Jones said him returning to Arkansas is not likely.

Mason Jones sure likes saying Mason Jones. Maybe we’ll be better off without him…

Oh, come on now. I didn’t really think anything of it. He was just speaking to what he hopes fans will remember him for.

Speaking in the 3rd person is never a good look. I still can’t forget him going nuclear on Muss. I would love to have him back, but no one can deny he’s a bit of a diva. No offense to you, Scottie.

While I’m not a fan of people who refer to themselves in the 3rd person either(had a guy in college do that and I wanted to smack him every time), Jones was not a diva. He wanted to win and when you have two alpha dogs on the same side, sometimes they clash. That happened between Musselman and him a few times, but there is nothing but respect there between the two.

Maybe diva was the wrong word. However, I would much prefer a guy being a diva, as opposed to being soft. Mason is definitely not soft.

I love the young man, but have always frowned on people talking in third person.

I had consistently thought Jones was likely to return next year, primarily because he probably wouldn’t be drafted (those reasons have been outlined here my many over the past month). Now, as I recognize his ascension from a good sophomore season to SEC POY was predicted by exactly NO ONE, there are probably better odds he can make an NBA roster in the near future than whatever the odds were in the summer of 2019 that he’d be the SEC POY.

However it works out for Mason, I wish him the best. I loved what he gave us, and appreciate his passion for the game. I’ll be rooting for him to succeed.

Hopefully Mason and Isaiah recorded a workout prior to April 6. I am sure Muss, with inside information from NBA, advised the two of that.

Source: NBA teams are prohibited from watching, requesting, or sharing any video (live or recorded) of a draft eligible player taking part in a workout that occurred after April 6, 2020.
armyhog April 10, 2020, 3:03am #12

This is just my 2 cents. I enjoyed watching Mason Jones play ball and hope he makes the best decision for himself! He left it all on the floor every game! With just a little more depth on last years team they could have won a lot more games.
There’s still a chance Mason Jones returns next season a very small chance. I’m hoping Joe returns.