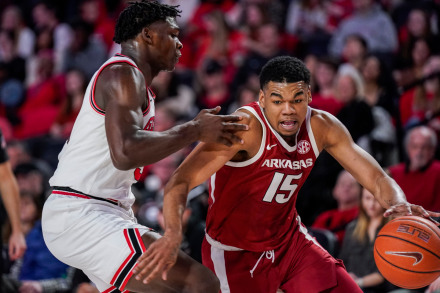 NBA draft prospect Mason Jones: 'I can achieve being an All-Star or being an...

Arkansas Razorbacks point forward Mason Jones was one of the most impressive scorers in all of college basketball last season.

The thing about work ethic, it can make up for a lot of “skill” deficiencies. One of the things I really liked about the documentary series,The Dance, is how once Rodman decided he could maximize his opportunity in the NBA by focusing on rebounding and defense. He said he would go into the gym and have his friends throw up shots just to see how each shot would bounce of the board and rim. He studied that over and over so he could learn how to best position himself.

I only know Mason from afar but he seems to be the kind of player to do something very similar and I wish him the best.

Seems like the Mason ship has sailed. Not a surprise. Wish him well, but he seems to have a much higher opinion of himself than the NBA does. I still think Isaiah is the key to next season. DD, any rumblings on HIS decision? I think we are a Final Four threat with Joe back. Thoughts…?

but he seems to have a much higher opinion of himself than the NBA does.

You show me a player that doesn’t think he can and I will show you one that can’t. Go for it Mase!

My guess is possible Sweet 16 if Joe returns.

But still an NCAA one if he does not.