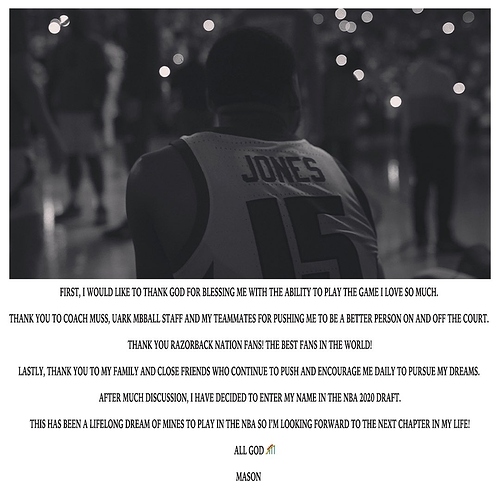 Thanks Mason for all the thrills. All the best pursuing your dream. You’re a Hog for life and we appreciate you.

I understand his decision, but dang it, we can’t catch a break. Every time I think “next year” we lose key guys that I was counting on for “next year.”

So does he intend to sign with an agent?

So, Scottie. Did you ask Mason what happens if he doesn’t think he will be drafted as we move toward June 3rd? Your article indicated the mock drafts of ESPN and the Athletic don’t show him being drafted.

He should be drafted, in my view. The object of the game is to put the ball in the peach basket and not many do it better than Mase. Plus, and a big plus…he is a guy who wants the ball and is not afraid to succeed or fail. He is a strong competitor.

Important to note that as of 2019, you can hire and agent and still return to college basketball if you pull your name out by a certain date. That date last season was May 29.

I could certainly be wrong, but I still think he returns once the Undergraduate Advisory Committee gives him real info from NBA teams.

It depends on the agent. I think the NCAA (or Board) provided a pool of agents that you can use and still retain eligibility. But if you sign with one outside of that pool, you are all in at that point:

Under the new rules adopted by the NCAA’s board of governors and Division I board of directors, college players are allowed to be represented by agents who are certified by the NBPA and NCAA (the agents must become NCAA-certified no later than Aug. 1, 2020) after any season, so long as they request an “evaluation from the NBA Undergraduate Advisory Committee.” They must end the relationship if they return to school.

I have always felt Mason was not coming back next year.

Mason’s decision is not very complicated. He thinks he is ready for the next level, whatever that ends up. NBA, G League or overseas.

He knows that after what he accomplished this year, if that is not good enough for NBA, another year of college ball won’t make him any better prospect for NBA. In fact he knows that it will be hard to repeat this year and it will be looked at as if he digressed and there is a huge risk that will lower his value.

Once you conclude that, it is hard to come back and pour your heart into another year of college ball. You feel like you are playing at a lower level than you should be.

Entering the name in the draft, getting an evaluation and based on that coming back makes perfect sense for Isaiah. And I bet that is what Isaiah does and comes back.

But Mason is at a far different place in progression of his skills and accomplishments. He is ready. Mentally and physically.

Sadly for us I think that sums it up pretty well. Can’t thank him enough for the great season however!

This is a new development, but not a surprise to anyone. Mason’s opportunity to return, and even the likelihood that he will or won’t, wasn’t changed by this announcement. I can make a better case for why I think he’ll return than the case I could make for why I think he is gone… but that speculation won’t change the 2020-21 roster any more than today’s announcement did.

Thank you Mason. You will always be e legend at Arkansas.

Do your homework and decide your course after you have the facts from the NBA evaluation committee. Whatever you decide, good luck for the rest of your basketball career.

But Mason is at a far different place in progression of his skills and accomplishments. He is ready. Mentally and physically.

Not sure that I agree with that. Mason is not a typical Junior in college insofar as basketball experience is considered. You can throw out his high school basketball seasons as a 270 lb fat kid. He wasn’t much better in his one year of grad school. It was about half way through his first year in JUCO before his talent started to show with his newly acquired body. Joe probably has more high level basketball behind him than Mason has.

I think it would be short-sighted to think that the NBA and their scouts don’t know all this. I further believe that if he continues to work on his body and athleticism in the off-season, he can can make just as big a jump next year as he did in this past one. I think fans look at “stats” in a much different way than the NBA and their scouts look at them. He doesn’t need to score 22+ ppg next year to impress the NBA, especially if Arkansas is a much better team. If he scores 17-18 ppg, improves his FG percentages, and increases his assists while improving his assist to TO ratio, the NBA scouts will recognize that.

If he still wants to enter the draft, I’ll be behind him 100% and thank him for the great career he had as a Razorback. If the NBA ends up recognizing these things and offers him a 1st round spot, then, sure he should take it. I do not believe, however, that he is close to the best he’s going to be physically or basketball skill wise. He can still have a better overall year here than last year and score 17 ppg. I firmly believe he loves to give out assists and gather in rebounds just as much as he loves scoring 30+ points. Winning is the single most important thing to him.

PJ, one of my all time favorite players thought the same thing. He got someone to tell him he was a lock to be drafted. Thurman should have listened to Nolan. PJ, I’m not saying you’re wrong. He may have needs I’m not aware of. Regardless I sure loved watching him this year.

It is Mason’s decision and he needs to do what he feels is best.

I rarely offer up an opinion without doing some research with someone who is in the business.

You are one of the few saying he can’t get better, can’t improve his stock. One of the scouts I talk to believes his ball handling, turnovers and defense this past season will keep him from getting drafted.

That same scout believes another year of polishing in college would move him into the late first or early second round. He is well aware of Mason’s story.

Same scout believes Isaiah is a better prospect and would be a mid-to- late second rounder if he comes out this year.

I guess one good thing might be this theory of Moses Moody leaving Arkansas at the alter thing that you have pushed so much would be null and void.

I totally agree Isaiah is a better pro prospect than Mason. But I am thinking about when a player would decide to leave.

Here is the way I see the two of them.

I am sure Isaiah had visions of going pro after this year, but the injury really hurt that cause. Isaiah can improve two fold by staying another year. He did not have as good a year and could have a lot better year next year while he is improving his skills. I see no risk in his stock going down by staying unless of course he gets hurt.

With Mason, I think he can certainly improve his skills by staying. Every player will improve every year no matter what level they are playing. But how much is the question with Mason. Can he improve as much as Isaiah can? But the overriding thing to me about Mason is he had a year like very few players have had and it will be so hard to repeat it and anything less is a huge risk in how that will be viewed.

So for Mason, it is a question of weighing the risk of staying against possible benefits. If he did not have such a spectacular year, there would be no question he will be coming back. But most players after such a year have gone on to cash in on that success.

Of course we all would like Mason to come back. There is not a player on the roster and on the commit list that can replace him next year.

But you are right it doesn’t matter what I think. It is what Mason thinks. But I just sense that his heart is not into playing college basketball anymore.

You may be right, but the problem for him - according the to scout - is that the cash is not likely going to be there.

If there is an overseas season next year, I guess he would likely be picked up and make some money, probably a nice sum.

Just not the amount of money he could make next season as an NBA draft pick.

With just two rounds, I have my doubts of him getting drafted. I sense he is prepared to go free agent route. The guy doesn’t lack confidence and swagger. That is his strength.

I must say that all of my thinking does not take into account the damn virus. I don’t know how it may affect all of this.

Until there’s a vaccine for Covid 19 I would hope Americans wouldn’t risk playing any sport across the pond! While this is Mason Jones’s decision to make it is all on him! I have enjoyed watching him play and hope he returns but if not I hope he has a successful career!