have received invites to the NBA Draft Combine.

Teams voted and invited the top 60 vote getters out of the 105 players submitted. An invite does not guarantee a player will be drafted.

Muss had Caleb & Cody Martin and Cam Oliver invited and play in it but only one got drafted.

I don’t guess we can know where Mason and Isiah ranked in the top 60 as per the voting?
Out of curiosity.

I would imagine the vote is somewhat similar to the mock drafts.

That brought up a question in my mind. Have there been any Razorbacks that were invited to the combine and did not get drafted?

Qualls but he hurt his knee after the combine.

Qualls was the only underclassman and I think that’s significant.

Qualls was on virtually every mock draft (mostly in the 2nd round). I believe he would have been at least an early to mid 2nd round draft pick. Seniors just don’t have any leverage in the baseball or basketball drafts.

I remember Qualls but I discounted that because of injury. I did not realize Macon and Barford were invited to the combine. Thanks for the information.

BJ Young was. I cannot find anything on Marshawn Powell.

The Athletic draft analyst Sam Vecenie released his latest big board today, which slots the top 100 draft-eligible players. Isaiah Joe comes in at No. 68 and Mason Jones No. 74.

In his column, Vecenie also wrote about how Aug. 3 isn’t technically the final date for players who are struggling with their decision. 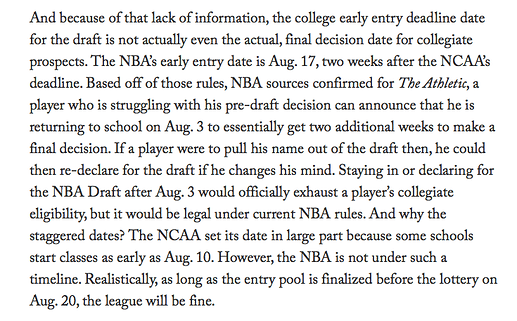