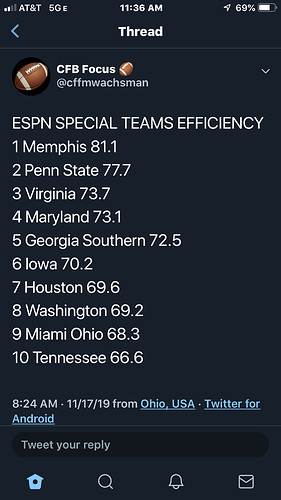 Dude you have as big a mancrush on Norvell as Hog Authority does on Petrino. Maybe we just need to hire his special teams guy instead, who is Pete Lembo the AHC.

Bringing info Jeffrey - have a problem with that boss?

Look man, we get it. You get excited thinking about Mike Norvell. We’re not the ones you need to convince, His name is Hunter Yurachek and he doesn’t read this board,

Listen man … special teams are important and especially so when you are less talented than most of the teams you play.

My guess is many on the board have no idea Memphis has such good special teams and will be interested to know this.

As for coach I actually want Leach and then Norvell.

Well, it is a message board and there is an ongoing coach search. Why the hate?

My guess is many on the board have no idea Memphis has such good special teams and will be interested to know this.

I have beat up on Jacksonreid for being a “one trick pony” for Norvell previously, but count me in as one who was impressed that Norvell’s special teams were top rated. I did not know that and I think that is significant, especially for teams trying to overcome lack of talent.

Comparing stats on Memphis to any Power 5 team makes no sense. I guess that was the conclusion made about Morris and his horrible offense the stats he had at SMU!
This means nothing!

This is a ridiculous take, Army. It absolutely means something.

Was gonna say, swine your working to much and speaking without knowing what people are saying, he likes CN but actually has been saying he prefers a couple of other coaches…stop power tripping on your posts like you know everything cause you have proven you don’t

Amazing only one SEC school and that is Tenn. All information is good, need more of it not less.