Major league baseball's view on swing at the first pitch

I have long been an advocate of swinging at the first pitch “provided” it is in the sweet zone. Here’s Major league baseball’s view on it. 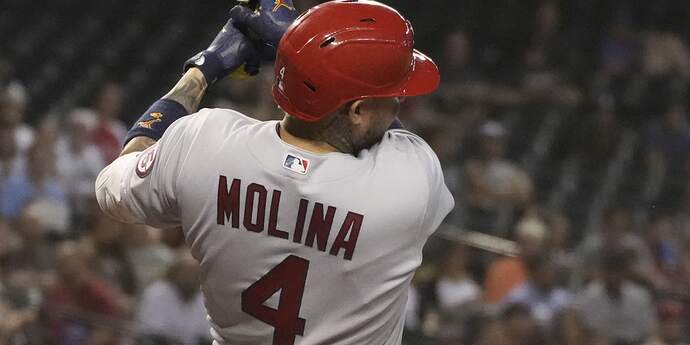 Hitters are attacking 1st pitch more than ever

Seventeen years to the day since he first suited up in a Major League game, you wouldn’t think Yadier Molina could do much to change his story. As a nine-time Gold Glover who seemingly prevents stolen base attempts merely by reputation, he’s either...

Major difference here, Billy. MLB isn’t trying to get into the bullpen because they’ll just run somebody else out there to throw 98 for two innings. We are.

And as we saw this weekend there are some very good bullpen arms in the SEC. Som like Tennessee have got guys throwing 104. The better teams in the SEC will have two or three very good arms in the bullpen just like we do.

I see two different things going on here. College pitching staffs are not MLB staffs and there is room for both propositions. I like working the count to get starters out of the game in the SEC and college in general. The bullpens, though really good on the great teams, are normally still a lot more volatile than the starters. That is why they are relievers and not starters. I think the Hogs have guys that work the count because they have good eyes for the plate and they should continue to do that. Some guys need to see a lot of pitches. Others not so much…I am looking at you Brady Slavens…Zack Gregory and Robert Moore need to keep taking pitches and working counts but Brady Slavens needs to be ready to swing. We have several others I think are “swingers” and need to utilize the first pitch option more because if they don’t their strike out probability goes up.

I have never been a fan of the thought that there is only one way to accomplish something or only one right way to do it.

Obviously, it can also vary by each individual batter. Is he mired in a slump? Is he currently hitting well with 2 strikes? etc. But, each pitchers tendencies are also important in the decision.

I totally agree about pitcher tendencies for instance the chunky left-hander for a.m.started pretty much everybody off with a looping curveball that we took for strike one 85% of the time probably.if you know he’s going to start you off with a looping curveball you’re up there in front of the box looking for that he hung several of those. Most college pitchers don’t have control enough to constantly mix first pitches…They’re going to throw what they feel comfortable getting over for fear of getting behind and having to throw a strike then

Agree. College pitchers vary a lot more in skill & types of pitches they throw than major leaguers. I have no opinion on whether to swing or take on the first pitch. I do have an opinion on who is best able to make that call–DVH/Thompson and the hitter at the plate.