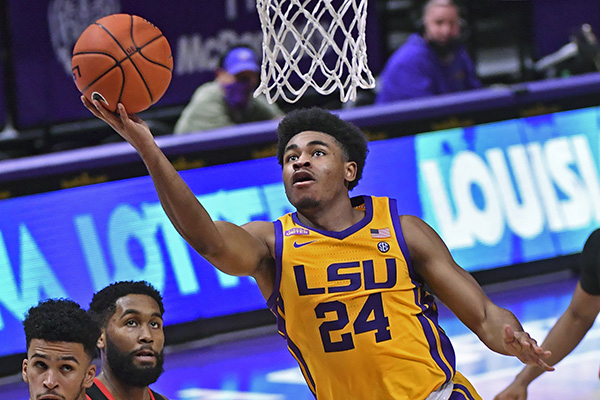 LSU Coach Will Wade said it will be a game-time decision whether the SEC’s leading scorer plays against Arkansas on Wednesday night.

So, basically he’ll be playing then. Okay.

Or, they know he won’t be playing and don’t want Muss to have time to reset his defensive priority from Cam to the 2nd player he wants to shut down. Without a doubt, Cam would be his priority #1 if he’s playing.

Still playing at LSU, which means we’ll be playing 5 on 8 all night long.

General, did you cheat when you reffed?

Still playing at LSU, which means we’ll be playing 5 on 8 all night long.

There’s been more than once we won at Baton Rouge and lost to them at BWA. Including two years ago.

There’s been more than once we won at Baton Rouge and lost to them at BWA. Including two years ago.

Why of course, they didn’t cheat enough at Baton Rouge so they were chastised by the SEC office. They changed the 3 refs that were at BWA with instructions to the new crew to cheat at such a level that it will be impossible for Arkansas to win, even at home.

The game at BWA came first…

Nope, but I allowed teams to play more than some other officials might.

Very true, but it had to do more with excellent shooting on our part that the officials couldn’t control.

LSU fans probably thought this when the Tigers were hit with 35 fouls and Arkansas shot 54 free throws in last season’s game in BWA.

I can’t believe Will Wade still has a job

That’s the most intelligent comment of the day! Will Wade the most honest and respected coach in college basketball. What a complete joke to LSU and the SEC! He should have been fired longe ago.

I think Cam will play. I don’t know if he’s going to be 100%, but I hope he is. I don’t want this, well they didn’t have their best player and now they do talk the next time we play. Granted we are without Smith, but I don’t care, I want to play the best every time. We are going to need to know our deficiencies and continue to improve if we want to do anything at the Dance other than show up.

I will take any advantage over them simply because I despise them so badly.

I hope Mr. Thomas doesn’t play, or at least plays at less than 100%. Will happily take any advantage over the Tigers. Just wanna win tonight.

I want to go as far as possible in the dance, even if that means losing tonight.