I really hope this is the game that we turn our offense around.

It would be nice if we could start hitting like our potential because we would be absolutely deadly!! 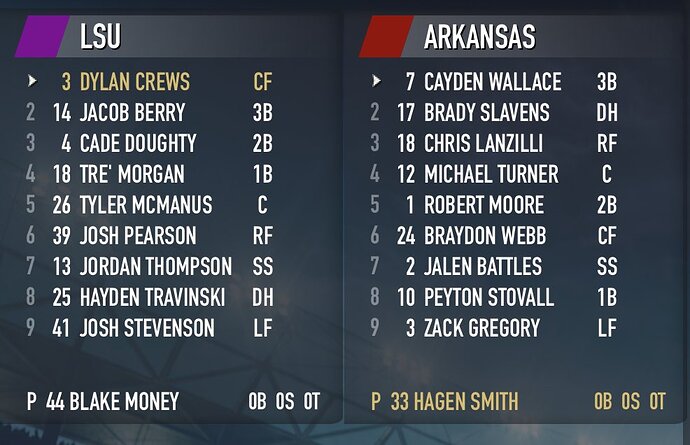 Smith is going to have to have better control tonight than he’s been having bc LSU is right on top of the plate and lead the SEC by a wide margin in HBP and he’s been missing off the plate a pretty good bit lately.He needs to get off to a good start and give us chance to get him a lead.

Their Starter has not been the same since hurting his wrist,he throws hard but can leave some pitches up in the zone and he can give up some HR’s

Smith being home will help. I’m thinking his first SEC start at a hostile environment was a problem for him next week.

Yes Hagen Smith learned a lesson at Florida last week. He got through the 1st inning without allowing a base runner. Most important of all no walks.

That a way to get us going Caden!! Lead off double

Let it be known that Wallace swung on first pitch. I may keep up w this for awhile

And he swung at the first pitch!!

Let it be known that Wallace swung on first pitch.

He loves to play in the dirt.

We got to get this run in come on Chris

Are you freaking kidding me!!! Get the stinking ball out of the infield

46 career homers, only 4 for the Hogs

How disappointing. That base running mistake could costly

We have got to stop doing that kind of stuff

Not a good decision by Wallace

Well, it cost us at least one run. Need a hit from Moore