To all the cynics: Louisville is a basketball blueblood. Pitino is/was a blueblood coach. Yet here we are. I’m almost as cynical about the NCAA as some of you, but when you have sworn testimony in court that someone is buying players, NCAA is kinda forced to act. This includes the Adidas stuff with Brian Bowen; Adidas is identified as a Louisville booster because of its financial support of their athletic program, same as happened in the Kansas notice of allegations. 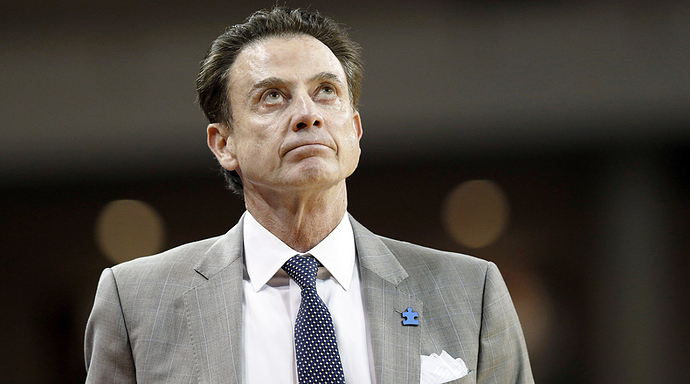 Nothing happened with either LSU or Kansas basketball and their violations were on tape. The NCAA doesn’t touch high profile basketball programs. They have no spine at all! All we can do here at Arkansas is produce with the athletes we get and we have done that in the past (in basketball and football) and at present in baseball, track, cross country and golf (both men and women). We’re improving in gymnastics, softball, soccer and women’s basketball and men’s basketball. Now we have to dig our way out of our football grave. All we as fans can do is cheer on and encourage our coaches and athletes and remain steadfast Razorbacks.

Nothing happened with either LSU or Kansas basketball and their violations were on tape. The NCAA doesn’t touch high profile basketball programs.

Wrong. Kansas got what Louisville got today back in September and have already made their official response. NC State did too. They haven’t figured out yet what to do with Will Wade’s strong-ass offer, or Arizona’s mess – but LSU is NOT a basketball blueblood. 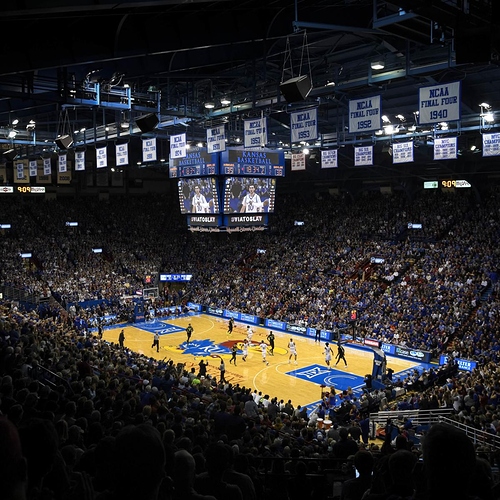 More than five months after the NCAA delivered its notice of allegations to the University of Kansas, KU responded with an emphatic and aggressive defense of its men's basketball ...

I wouldn’t be surprised if LSU or Arizona or both have already received their NOA and have just not released them yet.

It’s not over yet. Unfortunately, the NCAA enforcement staff is not deep. It goes one school at a time. Auburn and others will feel it sooner or later. I am of the belief that LSU will get something eventually.

I hope that you’re right Clay, but I don’t have much faith in the decisions of the NCAA. When North Carolina had athletes that never went to class nothing was ever done because the NCAA said that the University had handled it in-house.

The process is slow. Louisville has a period of time to respond to what it got today, possibly up to six months. Then the NCAA responds to that. Then the Committee on Infractions goes over the responses with both sides and makes a decision which can then be appealed.

Useful graphic here. Kansas and Louisville are on the Hearing Track. Pete Thamel of Yahoo Sports estimated in February that the COI might make a decision on KU around August 1. If KU appeals that ruling it could go months beyond that, and I think you can expect an appeal. The only way a case like this gets settled quickly is if the school says “Okay, we’re guilty” and self-imposes penalties. Then the COI can still amend that if they don’t think the self-imposed went far enough. 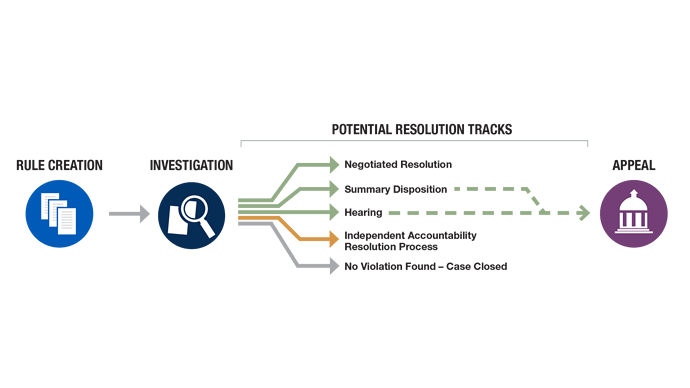 NCAA membership created the infractions process to ensure fair play and integrity among NCAA schools. Resolving a case of alleged violations include distinct phases of fact gathering, review and appeal.

Will Wade may be retired by the time LSU gets put on probation. What is the guy? 32-33?

That’s not what the NCAA said. On Carolina, they said the NCAA does not establish curriculum. That’s accreditation.

That’s not what the NCAA said. On Carolina, they said the NCAA does not establish curriculum. That’s accreditation.

Correct. UNC got away with it because the bogus courses were open to all students, thus were not an extra benefit to athletes. It’s not the NCAA’s place to say what courses a school should or shouldn’t offer, or how to structure them. Those courses were academic fraud, plain and simple. The accreditation agency gave UNC a slap on the wrist of one year of probation.

Clay, I’m sorry that I didn’t use the right terminology, but I was in college education for a long time and know when someone is abusing the rules. That’s just a good way for the NCAA to avoid placing any blame on a basketball powerhouse. Let’s call it the way it is! We’ve all seen $100-500 handshakes between boosters and players! That’s the soft side of paying players and abusing rules. The real pro’s work in the $30,000- ? category and very seldom are even investigated because the NCAA doesn’t have enough compliance people and won’t give up the power to someone who can prove the cheating in NCAA powerhouses. Kids that don’t have a pot to pee in are driving very nice cars, wearing good clothes,etc. Most of those kids need help, but let’s not pretend that the rules aren’t being broken. Back in the 60’s a good friend of mine was the starting QB for a Big Ten school and he was being paid $5,000 to check once a week to see if the permanent seating was still in the Stadium (his words verbatim).

Two different beasts. Oh well, just wanted to specify exactly what happened. The NCAA did not rule on the courses. And, that is exactly what they said, that they don’t rule on the type courses you can take. And if a professor does not require you to sit in your class room, that’s OK, as long as no one else has to sit there. There are many courses on many campuses that don’t require attendance. I had some when I was in college. You turned in the work and took the exams. Teachers rarely take role in college. More coaches take the role of their athletes than do the teachers. You probably understand that if you were in college administration.

UNC finessed the rules, unquestionably. I’m absolutely cynical enough to think someone at UNC said “let’s set up these garbage courses but if we make them available to everybody, its three free hours of credit for everyone else and a sham course to keep our basketball players eligible.” But that’s not the NCAA’s fault. That’s UNC’s. The NCAA learned a lesson about overreach when it hammered Penn State for the Sandusky mess. That was an institutional failure too, but it didn’t fall under NCAA rules either.

Pat Forde, who lives in Louisville and has kept an eye on UL basketball for decades, has this look at the NCAA case. 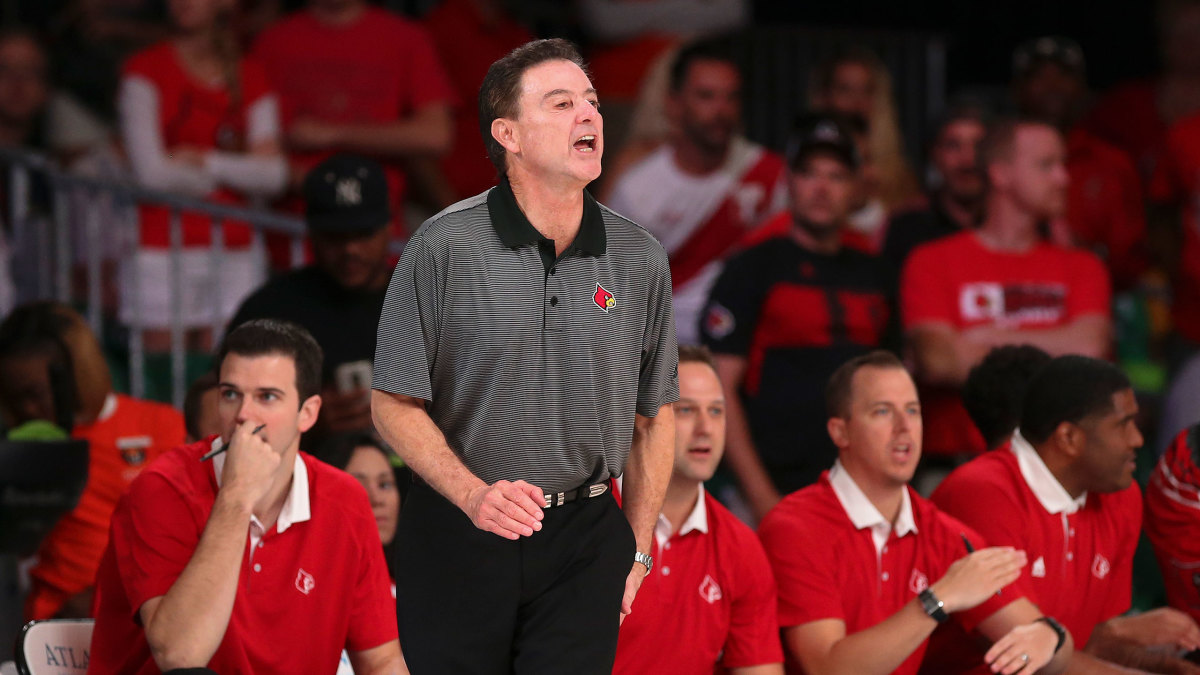 Expect the outcome to be hotly debated, no matter what the NCAA ends up ruling.

There are some details here that make this not your run-of-the-mill NCAA allegation:

Third time UL basketball has had a scandal, all involving Slick Rick.^ It took them until the third one to fire Pitino and get rid of Tom Jurich. But Pitino and Jurich are now gone. Do you punish those left behind for what they did, or let it more or less slide? Theoretically as a repeat offender UL would be subject to the death penalty, but that would be a nuclear bomb on the college sports landscape. They have one Level One charge, and only a Level Two aimed at Slick Rick. Even with relatively short list of charges, UL could get five years if aggravating factors are considered, 1-2 years if not. Or the Yum! Center becomes a concert hall only for a year or two.

But at least UL finally got rid of Pitino and Jurich. Bill Self is still at Kansas. Will Wade is presumably still making strong-ass offers. Sean Miller is still hiding money under a cactus somewhere around Tucson. Auburn won’t even acknowledge if it has gotten a notice of allegations, after hiring a coach coming off a three-year show-cause.

So does cleaning house get UL off easy, or does the COI decide the institutional problems warrant dropping the hammer?

^-- If you don’t remember, Ricky P had an affair, allegedly on a table at a restaurant, got the woman pregnant and paid for an abortion. Scandal One. UL assistant coaches brought strippers and hookers into the basketball dorm; Ricky P claimed he knew nothing about it. That got their last national championship taken away, but Ricky P survived. Scandal Two. Then the Adidas purchase of Brian Bowen for the UL roster, which is the crux of this one.

Great comments Swine! The problem is the process. It’s just like major lawsuits against conglomerates because they just outlast those bringing suit and eventually they either go away or the penalty becomes so small that little is accomplished.

Regarding Ricky P: He’s 67. The NCAA record for a show-cause order is 15 years on two occasions: One assistant coach who bet on his own team’s games, and a head coach who took bribes to get a kid into his Ivy League school. Even if he got a 5-year show-cause, that would force Iona to fire him and essentially end his college coaching career. Except at Auburn, which obviously doesn’t care.

LSU Athletic Director Woodward’s stepson is married to the daughter of Mark Emert, President of the NCAA.
One has to wonder if this connection has had anything to do with what hasn’t happened with the LSU situation.