Hey Matt and/or Clay, I know it’s early, but if you were constructing the lineup with the information you have today (and let’s assume a healthy Goodheart), what would it look like?

Funny, I was going to ask that question today as well. Specifically, who do you think would lead off for this team.

My guess for a lead off man would be Franklin. Goodheart in the 2 or 3 hole. Martin and Heston in there as well.

I’m guessing that you meant Opitz?

I’ll start by saying that I don’t expect to see the same lineup as much as we did last year. I think there are more options this year that will allow the coaches to mix and match, especially in the midweek. My guesses are based off fall practice and it seems like there is always a change or two between the fall and when the preseason begins, which could make some of my thoughts outdated.

First Base: I think Matt Goodheart could eventually play here. We’ll see if he’s ready to play in the field by the first game. I think he will at least be able to DH the first game.

Second Base: Probably Jacob Nesbit. Braydon Webb might also be an option there, but I think he probably projects more to the outfield. How good is Robert Moore? If he wows in the preseason, maybe he could push for time at second.

Shortstop: Casey Martin with maybe Nesbit or Moore as a backup.

Third Base: I think Cole Austin, the transfer from Arizona State, is the most likely candidate to start. Jesse Pierce is a versatile infielder and could back up here and at other infield positions.

Catcher: Casey Opitz is the clear starter, but Cason Tollett and Dominic Tamez are likely to get some playing time when series are in hand, games are out of hand or in the midweek.

Outfield: I think the most likely starters are going to be Christian Franklin in center, Webb (probably in left) and Heston Kjerstad.

DH: Once Goodheart is in the field, I think Zack Gregory is a candidate to be the DH. He had a really good summer and fall in 2019. I see him potentially having a breakout year in 2020 similar to the way Nesbit had last year. Like Nesbit did in 2018, Gregory redshirted last year and then went to Bismarck, N.D., and stood out in the Northwoods League.

As for leading off, I think the most likely candidates are Goodheart, Franklin and Webb, and maybe Gregory. I could also see some of those players put near the bottom of the lineup to try to set the table for the top.

Here’s a stab at the lineup:

Thanks Matt. From what I’ve seen the past two falls it does seem like Gregory will be tough to keep out of the lineup in some fashion.

Yes Marty I did.

We all need to enjoy watching the hogs this season. Martin, Heston and Optiz will be playing their last season. There are several more that will leave after the season is over. I just hope they make it to Omaha. 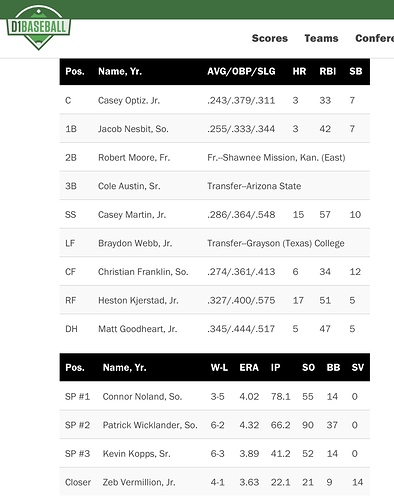 I talked to Dave Van Horn last week and we went over possible lineups. It’s still early and all of this is just a guess. I suspect that Braydon Webb is going to wow folks and he might be the leadoff man. Can run, has power and has great bat speed. Van Horn called him a “big” Casey Martin. He can play about anywhere, but will likely play left.

Matt Goodheart is behind where Trevor Ezell was this time last year as far as his throwing, but his swing is 100 percent. He may play first at some point, but I suspect he’ll just be DHing the first two months.

Austin has had injury troubles. I think he and Nesbit will split time and they take it easy on Austin at third. Austin is a really good defender. He goes to his right at third like Bobby Wernes. We’ll see how those two hit because they both can defend.

One of the thoughts from both Van Horn and Nate Thompson was making sure that there is a top threat behind Heston Kjerstad. They want someone to protect him. Now that might be another spot for Webb.

Why Webb so low??

He might hit higher. I put him in that slot because he has leadoff capability, and Van Horn has consistently put leadoff-type guys in the 8 or 9 hole to set the table for the top of the order. Whether it is Webb or someone else, I’d be willing to bet that the bottom of the order will have someone who does things a leadoff man does well - take pitches, run bases, etc.

I don’t mind having a great hitter in the 8th hole to be honest because a lot of times he will come up with people on base and if not like you said he can get on for the top of the order.

Van Horn told me Webb is a leadoff type guy. If he hits at bottom of order, that would be giving up some at bats for a great hitter. Matt’s point holds merit. Van Horn did that with Biggers and Shaddy but moved them up eventually.

It could be Webb bats late in order, but I see Webb at or near the top of the lineup.