"They might have to do some new graphics for the starting five.”

More from Eric Musselman on a potential lineup shakeup against TCU on Saturday: 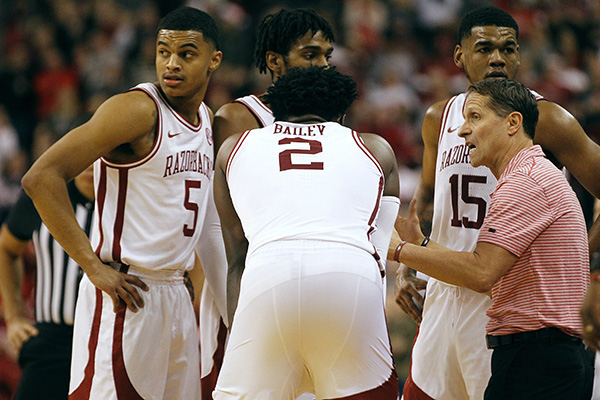 With the exception of the Northern Kentucky game on Nov. 30, Eric Musselman has floored the same starting lineup in each game this season.

Chaney has earned it,if he can stay out of foul trouble he can be a huge asset and I have noticed his passing has gotten much better .

Need a big man in the paint that hopefully can either score 10-12 points on baskets made or 7-8 free throws or BOTH… Missing baskets but being fouled and missing the FTs is not good. You gotta do at least one of the two point making things and great if both.

Baily if having an off night shooting is not likely to make it up by making FT… His % of hitting the front end of a 1 and 1 is not good. Missing a lot of two free throws from being fouled while shooting. You must get “something” around the basket.
So, perhaps Chaney is a good man to look at these next 10 games. We shall find out these next 2 home games, which should give him some home fan energy.

Chaney has the tools to score, and play defense. His ability to dish out assist is a plus too! On defense he is quick off his feet and can block a lot of shots.
I hope he gets into the starting lineup and stays there. You also mentioned the only problem for him foul trouble!

I’ve long thought Reggie is an above-average passer for a forward. He makes his mistakes, sure, but he’s made quite a few beautiful passes in his career. Love that about his game.

One thing also that impressed me about Chaney that I didn’t know is when Muss said he knows the offense as good as anybody on the team. I was upset with Chaney for a good while because he was not asserting himself on offense but now that he has ,I can see the potential that I thought he had.

Chaney just needs consistent minutes. He has plenty of ability. If he can just play for 20-25 minutes a game for the rest of the year…I think he will blossom into the player we think he can be. His first two years, so far…he has really only played in short bursts. A few games he has played quite a few minutes, but not many.

Is I J playing today he is not on floor

no he’s not playing from what i read.