Limpert a semifinalist for the Groza Award

Blake Mazza, who is now at Washington State, is also a semifinalist. Here is a look at all of the semifinalists and their stats this season. 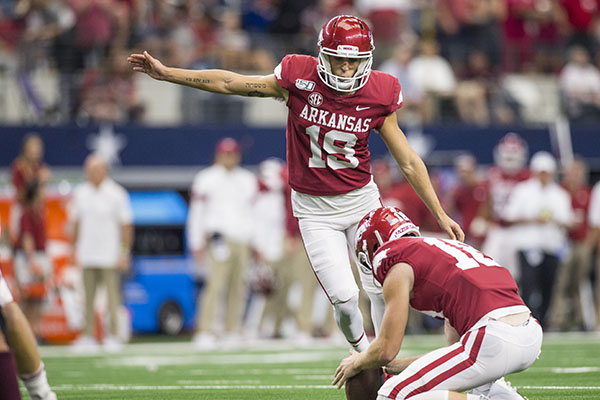 Arkansas kicker Connor Limpert and former Razorback kicker Blake Mazza are among the 20 semifinalists for the Lou Groza Award.

Happy for Connor and Blake being recognized at the kicking position.
Unfortunately, that will pretty much be the extent of Arkansas players being considered for awards this season.
It speaks volumes about a football team when your kicker is possibly your most draft worthy player.
Let me say that Agim and Harris May get drafted and who knows about O’Grady, but it is also possible that none of them get drafted and get their only chance via free agency.

I’m not sure about O’Grady because of the behavioral issues.

If he wants to go pro after this year, Rakeem Boyd might be the team’s best draft prospect.

I hope they all get drafted, but it’s just as likely that they aren’t drafted. When the draft gets to the third day it can get very interesting with how teams make selections. Some teams will draft best available player period and some others take best player available based on team need and some teams shock everyone by taking a player that hardly anyone has on their boards because they did their homework on a certain player and in round 6 or 7 they feel ok taking a risk.
As for Boyd, if he is healthy at seasons end it would probably be in his best interest to test the waters and see what teams think about him. If the feedback is positive he may decide it would best for him to go now and who could blame him.
It will be interesting to see how it all plays out, but for you or anyone for that matter to say with certainty that a player will no doubt be drafted when it gets to the third day is a stretch.

Matt, the film from today’s game with WKU isn’t going to help with the draft status of Agim and Harris.
If Boyd can remain healthy, he will likely declare for the draft and get selected.