Tom, thanks for a great read on Lance. I never get tired of reading about him. He was my boyhood hero, just as he was to thousands of Arkansas boys in those days.

When I think of Lance I just remember how he could glide with such speed and grace and jump like a deer to go get the football. He and Lynn Swann were the most graceful receivers I have seen play in the NFL. 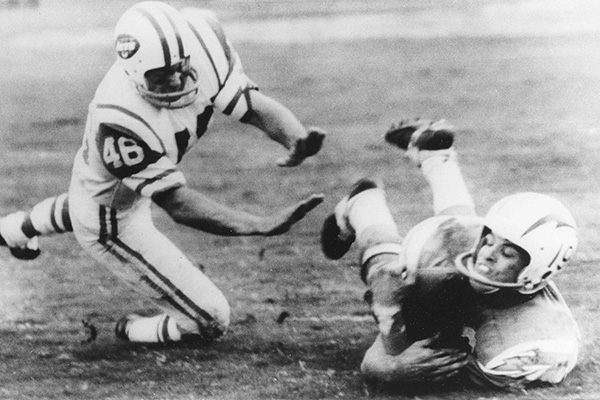 When you grow up in an area called Hog Chain, no matter the state, perhaps you’re destined to wind up as an Arkansas Razorback.

Sorry J! Did not see your post before I posted!

Two of the ADG’s top 10 pro Hogs were teammates of my dad. Wayne Harris was the other one. Didn’t get to see Thumper play in Canada but I saw Bambi play in San Diego and then Dallas. He was a precursor to the highly athletic WRs we see today.

There is an excellent article out front by Tom Murphy relative to Alworth and many of his professional exploits and accolades. The article deals mostly with Alworth’s time in the pros. I lived in Brookhaven MS, Alworth’s home town, three years, 88-90, during which time Alworth was inducted into the Mississippi Sports Hall of Fame. Interestingly, hardly anyone there knew him or had ever head of him. I started following the Hogs in 1956 and Alworth is still my all time favorite Hog in any sport!

was reliving several memories from this list and I understand a limit had to be put on it but was surprised to see that Joe Ferguson wasn’t mentioned.

Ferguson was in the NFL for a long time (17 seasons) but his stats were never great and he’s best known for handing off to O.J. Simpson. He only made the playoffs four times in 17 years.

We’ll have one more story in this series tomorrow. It will be an all-time team of Razorbacks in pro football (NFL, AFL and CFL).

I would suspect Ferguson would be the all-Hog NFL QB. Not really too many other options. Stoerner, Mallett, McHan.