Your article on defensive scheme was great. Thank you. Regarding today’s game, CEM seems to indicate the scheme is going to be Connor on Kohl and maybe Pleasant (not sure if that’s Smith’s obligation). So, how do you think Connor is going to match up with those players, athletically?

Good question. I think Justin Smith will likely match up with Joe Pleasant, who may have an inch on him, but they’re essentially equal size-wise. Smith has been a very solid interior defender to this point, blocking shots and remaining vertical, so I might give him an edge there. He’s so tough. Pleasant hasn’t shown to be much of a perimeter threat. I wonder if that leads to Arkansas being able to shrink the floor and limit Kohl’s post-up touches.

Connor Vanover is going to have to be disciplined defensively with Kolton Kohl. Vanover has a knack for defending/altering shots without fouling, but Kohl is drawing more than eight fouls per 40 minutes played vs. Division I teams this season. Unless Connor gets in foul trouble, I think he’ll be able to stay on the floor. And I feel like he’s almost due for a big offensive game.

Do they play both Kohl and Pleasant on the floor at the same time?

They have started together five times this season but haven’t played a lot with one another. Here is ACU’s team numbers with those 2. First and third columns are with them sharing the floor: 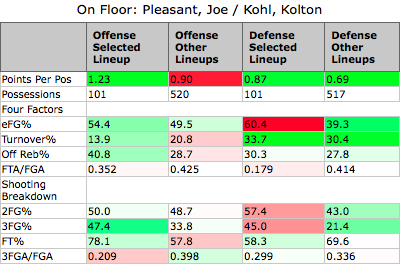