My biggest concern for the ‘21 season is KJ’s ability to quarterback this football team. Yes, he has raw ability, and he had a great road game at Mizzou. That’s an awfully small sample size under unusual circumstances. It’s one thing to play a great game off the bench, but can he lead when all eyes are on him? Can he read coverages and get rid of the football on time and to the correct spot? Can he throw a receiver open?

To be fair, I don’t know that Malik or Lucas can either. I wish we were more settled there.

I’ve said a few times that I think Hornsby fits Briles system better, but if the spring game is any indication of where he is at right now, I’d say he still needs some polishing.

Jefferson from everything I’ve read has stepped up in the leadership department and if the players you are leading trust you, that can go a long way. We’ve seen what happens when our players don’t trust someone. All that to say, I’ll trust the coaches and who they believe will best lead this team.

KJ had that terrific game as a starter against Mizzu. He proved he had the qualities you mentioned that day. But those questions will be answered next season. I worry more about the O-Line coming together.

That’s 70 percent Head coaches thoughts across college football! The QB position is the toughest and most valuable position on the field because they have the ball in heir hands 95 percent of the time…

Watching KJ this spring, I believe he’s the clear leader at QB and gives you the best chance to win games. He’s the best decision maker of the bunch, improved his accuracy a bit and will look like more of a complete player once he’s able to stretch his legs and run. We didn’t get to see that at any point the last two months. I don’t believe it’s fair to expect him to complete nearly 70% of his passes like Feleipe Franks did last year. I think he’s ready to lead a team.

Franks turned out to be a sweet gift Sam got. Much like Smith was for Muss.
KJ is a big strong athlete to. Just without the top SEC experience Frank’s had.
Will he flash at times - yes. Will he struggle at times - yes. Let’s hope the 1st is more prevalent.

A better run game will help out the QB. I am anticipating a better run game this year. If we can run the ball and not get into long yardage situations, KJ won’t have to be at 70% for us to be successful.

By this fall he will have been on campus for 3 fall practices and one spring and it will be his third year on campus.

If he’s not ready by then time to get a new QB. Kids younger and with less experience are starting in several places.

KJ didn’t come off the bench at Missouri. He started and knew he was going to do so. 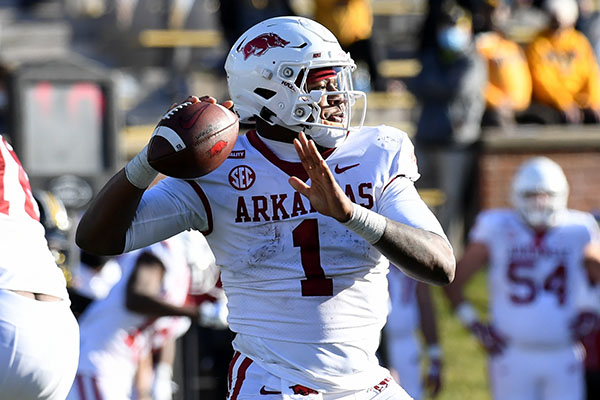 Carl Diffee, KJ Jefferson's high school football coach, knew his former standout was capable of the starring performance he had against Missouri.

I feel really good about KJ. I was so impressed with him against Mizzou. really had very nice pocket presence, such a huge improvement over Franks in that aspect. throws a nice deep ball. can run well. I think he’ll be upper 1/2 of the conference qb. with improved OL, improved RB, hopefully healthier TE’s and several talented WR’s (including Superman Burks), I think the whole offense will be good.

I’m will be surprised if we don’t win 6 games and go bowling.

Correct. Thank you for catching that. I knew he started, but in my mind I was trying to draw a distinction between that situation and being the full-time guy. Not my best communication!

I don’t think KJ will probably ever be a high % passer but Briles can certainly help him by the plays he calls and when he calls them.
I think if we become a run on the first two downs pass on the third type team, then we are hurting his chance of being effective, but if we throw the ball on first down quite a bit when the defense
is expecting run then I think you increase his chance of being effective quite a bit.

agree with your 3rd paragraph, and I think KJ has the skills to run and pass on all 3 downs and keep the defense guessing, much more than our offense could last year. He’ll benefit from an improved OL, more experienced WR and TE group. I’m excited about our O next year.

Our pass rush, however, has me terrified. I’m really looking at 6-6, but if we could somehow, miraculously, have a pass rush, we could up the W total.

This entire conversation is out of whack. The key to this team is NOT quarterback play. It will be in the improvement of the defense.

Arkansas has been historically bad on defense for quite some time.

If the defense improves - and I think it has - then quarterback will be a fun position to play. Can’t let teams hold the ball.

An up tempo offense has no advantage if it is constantly on sideline for 7-8 minutes on the clock.

If the defense is not better, can this offense put up enough points? Not sure. But I saw evidence of improved running.

The RPO was not evident in the spring game when the ones were on the field. That is THE play in this offense. I was told KJ ran it superbly when the media was not at practice and that was almost all of the team periods.

Whether or not KJ can run the RPO reads will be the most important aspect of his play. We did not see that this spring. But I’m told he did that well and that is why coaches feel good about 2021.

Clay, I would also wager if we have a good defence our starting field position on offence won’t always be 90 yards away from a score. That will help!

Catching punts will help too. : )

KJ was outstanding at Missouri and should have a win to show for it. That loss was on the defense.

Give him 3 or 4 games to warm up and with the weapons around him it will be a very fun season to watch this team finally be what we think they can be. They were close last season to being the type of team most fans expect year in and year out. Pittman’s second full season and many super seniors on the team and they should be able to compete with anyone. I am drinking the koolaid already and see 7 wins or more for this team with KJ leading the way.

If the improved offensive line and running backs can generate a running game, you add that to KJ’s running ability in the RPO or when no one gets open, Arkansas will have a strong offense. That will help the defense improve, not leave it out there over and over with little rest like they have so often in the past years.