About the portal a scholarships 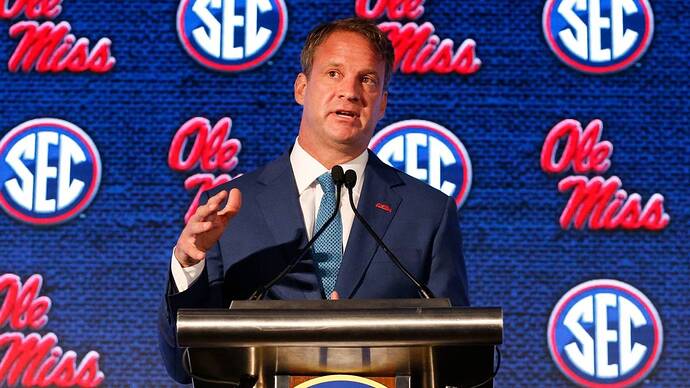 Kiffin said college football is essentially a professional sport now, and he warned that the transfer rules are going to lead to less high school players having opportunities to earn scholarships.

I am not a Kiffin fan, but he is correct. I fear college football and other sports actually, will
be a profession, and college administrators can do little to nothing to change it back.

Less opportunities for more players and more money to those players who can benefit from portal/nil. Sounds like the rich get richer and the band plays on.

college administrators can do little to nothing to change it back.

Yeah, because what administrators have been doing for 100 years now is ILLEGAL. You don’t seem to get that point. That status quo you’re pining for was built on an illegal foundation. The Sherman Antitrust Act was passed in 1890, four years before Arkansas Industrial University played its first football game and nine years before AIU became the University of Arkansas. They got away with it until college sports became a multibillion dollar industry in the last 30 years.

Actually I do get it, but when I say it to my friends they call me a left wing Socialist etc.
And no politics on this board.

Was it the university administrators or NCAA who acted illegally, or “misinterpreted the anti-trust laws”, in prohibiting payments to players?

NCAA was created by colleges & their administrators to set standard rules for sports & to manage recruitment of players to assure fairness & parity among the universities, enabled thru equal compensation via scholarships. It was not the initial intent of the NCAA to prevent players from being compensated.

Up until approx. 30 ys ago, college scholarships were considered desirable & more than adequate compensation to students wanting to play collegiate sports. Those who excelled also received the training & exposure to play pro sports. Athletic programs did not have big budgets & profits until cable television evolved college sports into becoming big $ business.

The current Supreme Court correctly ruled that athletes can be compensated. Is that only thru NIL payments from alumni, & is it to be determined whether universities can compensate players to play?

Expectations are that there will be more court cases to determine whether universities can bid for athletes to play for their schools. The Supreme Court did state that the NCAA was free to make reasonable rules about limiting university benefits to players. They also stated that the NCAA had the option to appeal to Congress to make it exempt from current anti-trust laws. I expect to the NCAA to appeal for Congressional anti-trust exemption in efforts to salvage collegiate sports.

There can be a few things they can do to control some behavior, though. For example, the P5 could establish a rule that no player can transfer to another P5 school without sitting out and losing a year of eligibility. That’d discourage coaches from poaching other schools’ players. They could sign players to 3-4 year scholarships and hold them to those contracts. There could be some sort of clause prohibiting transfers before playing a certain number years. Lots of possibilities along those lines. Some of that could get tested. Many non-compete clauses are illegal. Still, I could see something along those lines.

What I can’t see is some kind of cap on what an athlete can earn from his NIL.

I think it’s likely the P5 will form some sort of separate coalition that makes rules for its members, maybe expands the number of scholarships, things like that.

I caught up on some SEC Now programs this morning. Gene Chizik commented about the portal and its effect on students. He pointed out that once in the portal, students are not allowed back to their original team (as CSP has stated). He also said that sometimes immature kids make stupid choices.

Some of his comments:

How he would slow down the process: 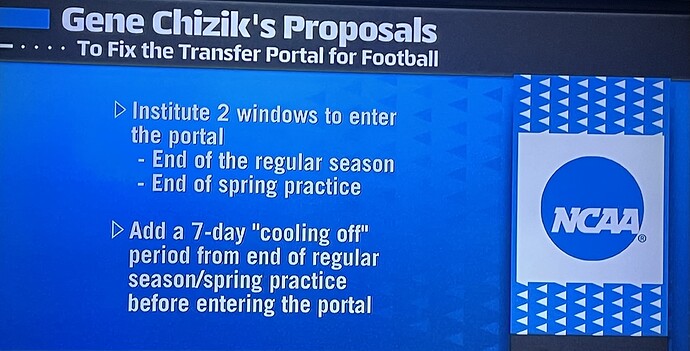 Its a good thing you are here to enlighten us all with the points we miss. Without your all knowing wisdom we would all be wandering lost in the wilderness. I just want to thank you on behalf of the board that you are so humble to take pitty on us pitiful creatures.

Was it the university administrators or NCAA who acted illegally, or “misinterpreted the anti-trust laws”, in prohibiting payments to players?

The NCAA is what the member schools want it to be. So the answer is both.

. I just want to thank you on behalf of the board that you are so humble to take pitty on us pitiful creatures.

I just want to thank you for your inability to handle someone who knows what they’re talking about. Why don’t you just block me and get it over with instead of the passive aggressive whining? Meanwhile I’m going to correct an oversight on my part,