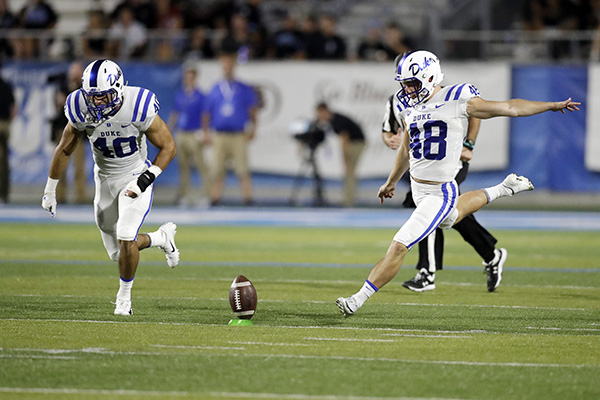 Also looks like a grad transfer this year RS Junior

Dream come true for this young man. His dad just posted a pic on Facebook of he and AJ as a young boy wearing Razorback gear at a game.

Do we also have a highly rated PWO coming?

Rhett Thurman of Cabot is on campus.

Surprised Sam gave up a scholarship to a kicker at this juncture, not criticizing
Sam, did an amazing job overall, just surprised. The kid is accurate no doubt,
thinking someone else would handle KO duties w 15-54 touchback ratio.

I like this move. The other kickers will get a year to compete and settle into things. By then it may be clear who gets this scholarship.

I don’t believe Arkansas gave Reed a scholarship, I think he is transferring in as a walk-on.

BJH, I read the article to clearly say he would be on scholarship.

It clearly says he’s on scholarship. Unless someone gave RD some bad info…

A J Reed’s whole family are huge Razorback fans. Arkansas is expected to have tough year in 2020, as for as their won and loss record.
Would Reed being at Arkansas make a difference in them going to a bowl game? I don’t think it would.

I have no problem giving a scholarship to a kicker of this caliber…hopefully he can continue to kick this accurately,if you can count on three points anytime you get around the 40-yard line that’s a very comfortable feeling for the coach and the team

You usually end up getting the kicker and the punter on scholarship, and most of the time the long snapper. A lot of times you wait to see who wins the job and then give the scholarship, but that depends on the staff.

Reed looks to be just fine as a FG kicker. I would think there will be some competition for KOs, with one of the PWOs having a real chance to win the job if more consistency is shown on getting TBs.

A field goal from the 40 yard line, in college football that would be a 57 yard field goal.

A good percentage from the 30 would be a 47 yard
field goal and that be like picking in tall cotton.

notice I said around 40 his longest was 51 but probably has 55 yd range,…good enough for me

We have confirmed he is on scholarship.

Not something we would just throw out there without confirming.

That’s good if he can have the same type yr for us he will be well worth it!