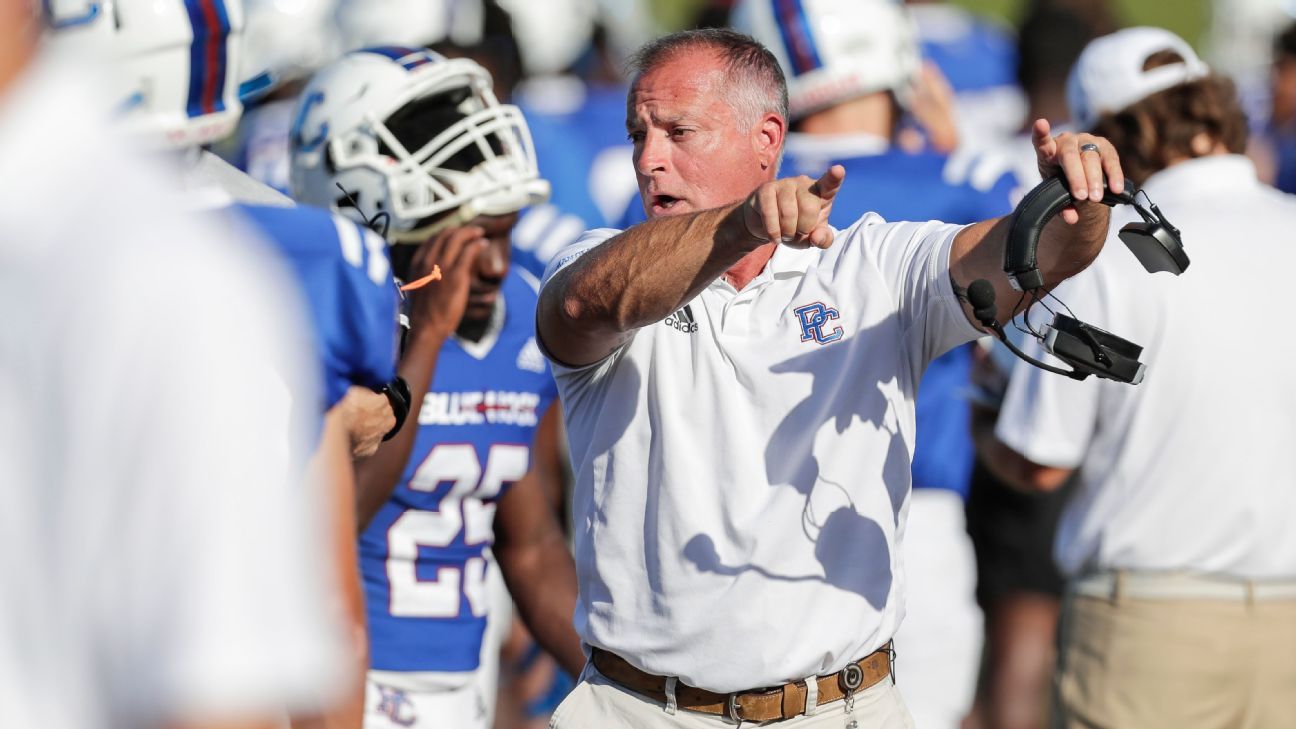 I’m sure he could get another top high school job, but I wonder how the quick exit make hinder getting another college head coaching gig.

Of course, he might have something already lined up.

Presbyterian coach Kevin Kelley, who built a reputation as “The Coach Who Never Punts” during a successful career as an Arkansas high school coach, is stepping down to “pursue other football interests,” he said on Saturday. Kelley went 2-9 with the FCS school in his lone season after leading Pulaski Academy in Little Rock to nine high school state championships in 18 years. Presbyterian finished third in FCS in total offense and ninth in scoring offense, but last in scoring defense, allowing more than 53 points per game.

Presbyterian did finish third in FCS in total offense and ninth in scoring offense, but last in scoring defense, allowing more than 53 points per game. The Blue Hose punted 13 times in 11 games and converted 29 of 84 fourth downs.

Surprised he’d do that after one year. Maybe he decided trying to play schools that offer scholarships with one that doesn’t is too much to overcome

Nobody else in his league gives scholarships either, and he went 0-8 in conference play.

I was under the impression that PC is the only one that doesn’t. Seems like I read that earlier this year.

Nope. The Pioneer football conference, like the Ivy, is FCS non-scholarship.

Then his peer teams were kicking the crap out of him all year. However, there’s no reason he couldn’t change that. At least no reason I can think of.

He didn’t have spring practice; that league played a spring season last year with someone else as the HC. But then nobody else in the league had spring ball either. Presumably he could have ironed out some kinks both on O and D.

I’m wondering if he’s got an offensive coordinator gig lined up somewhere and he won’t have to worry about the defense.

I bet he ends up as a college coordinator somewhere.

KK’s offense did put up big numbers. Folks may be taking notice w Kiffin’s results, he went for it 42 times on 4th down converting 62% of the time. Punted 38 times. CKK would have to adjust just a tad, you may see more coaches using Kiffin style analytics on offense.

Did Presbyterian decide to punt

Did a Presbyterian decide to punt