Though the holding penalty against him on KJ Jefferson’s long run Saturday cannot be wiped away, freshman receiver Ketron Jackson may have earned some early season points with Sam Pittman for the mentality he exhibited in that sequence: 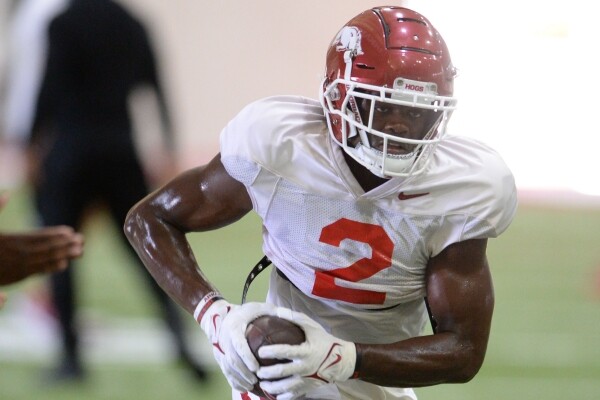 Ketron Jackson was in a state of stunned disbelief Saturday when he was flagged for holding on a big play by the Razorbacks’ offense.

It looked like that to me too. He also looks like an SEC stud WR already and I think we will see more and more of him.

If you put a palm on someone it looks like a hold. Maybe it was closer to a grab. Still, I prefer our guys being in the plays rather than out of them. Kudos on the effort.

If you put your arm/hand outside someone’s body (like outside the shoulder pads), you don’t actually have to grab them to restrict their movement. And you’ll probably attract the yellow laundry in the process.

I think the blocking technique itself was good but it was once Jefferson passed them and the CB tried to turn and Ketron obviously held on. I am like Pittman, you have to love his physicality for a freshman. He is going to be a stud.